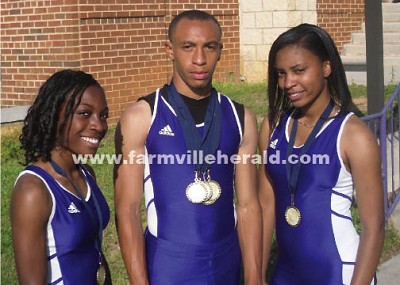 Raheem Nash was sixth in the long jump (21 feet) and the 100 meters (11.4 seconds), and the 4×100 Relay Team of Nash, Walter Christmas, Ralick Lockett and Milton Monk placed fourth.

Lockett and Nash tied for sixth in the High Jump. Tyrek Goode threw a personal-best of 118-feet, six-inches in the Discus. The PE boys team placed eighth out of 13 teams at the meet.

Kyerra Hurt was fourth in the 200m and seventh in the 400m Runs. Pashion Blank was fifth in the Triple Jump with a leap of 31-feet, one-inch. Delantra Nash was seventh in the 100m Dash. The girls placed 11th out of 13 teams participating in the meet.

Last week, the Eagles participated in a quad meet at Powhatan against the hosts, Bluestone and Nottoway.

Brenae Carr achieved a personal-best in the High Jump at five feet. Goode finished first in the Shot Put with a throw of 46 feet.

The Southside District meet was scheduled to be run on Wednesday afternoon at Powhatan High School at 4 p.m.