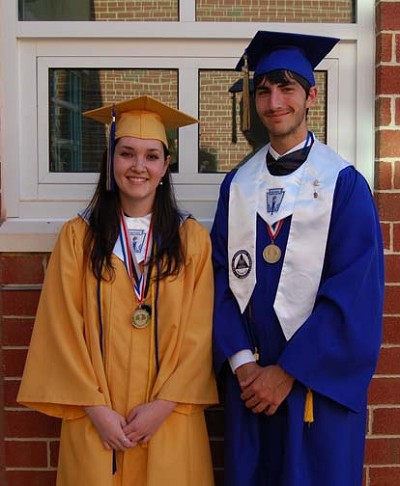 CUMBERLAND – “I expect each of you to be successful. However, be careful how you measure success. Success should not be measured by how much money you make or by the material objects you have but by the difference you make in the world-the positive differences you make in the world,” shared Cumberland County Public Schools Superintendent Dr. Amy Griffin to the graduating class.

She'd shared these same words just the week before to her own son before he graduated from college and now she was standing before the Cumberland High School Class of 2011-the same students she'd first met as fifth graders-and passing on these simple words of advice.

“It's not only what you do, but how you do it,” she continued. “Be a person of integrity but be humble. Be kind and giving to people. Be passionate and persistent about what you believe in. And be brave and don't be afraid of failure.”

“I wish each and every one of you the very best and I hope you know that you have the ability and power to make a different and a positive contribution to Cumberland and the world. So now go out after tonight, and change the world!”

On Friday evening, May 20, 106 Cumberland students walked across the stage and received their diplomas with 16 students earning Associates Degrees from Southside Virginia Community College a week prior and 55 percent earning Advanced Studies diplomas.

Cumberland Board of Supervisors Chairman Van Petty marked the day of celebration by expressing that the graduating class can now say, “We made it” after 13 years of assignments and tests completed.

And don't forget about those senior projects that were presented on Friday, May 13, he added.

“Completed!” he announced to cheers.

“Look to the person to your right and then to your left and say, 'We made it!'”

“We made it!” echoed throughout Cumberland's gymnasium as the seniors responded.

“I encourage each one of you to make education a life-long journey,” shared Petty. “The economy has changed the job market and it affects the way we live. The skills you have today may be obsolete in five or 10 years. You must be willing to learn new skills. My challenge to you today is to not reach for the stars but beyond and congratulations to each of you.”

Heather Fowler, the class salutatorian, noted that the road to graduation was at times rough but that the obstacles were overcome and now future challenges lie before them.

“This would not have been possible without the many people in our lives,” she said before presenting the Class of 2011. “To the senior class, we have seen each other experience the good times and witnessed each other's hard times. We have helped one another through the bad grades, tears, and losses. We have learned from one another the skills needed in life to communicate with others and finally we have made memories that will never be forgotten and tonight we make a final memory as one.”

Dr. Christine Ross, chair of Cumberland's School Board, addressed the senior class and told them to never forget how important the “little things are” in their lives, no matter where they might go in the world.

“Never forget to stop and enjoy the sunsets, the rainbows and all those things that we take for granted in our very busy lives,” she said.

Cumberland High School's Principal, Jeffrey Dingeldein, offered the Class of 2011 four “agreements” in his address to the class and promised, that if kept, they would teach the graduates lessons in the future.

The first agreement was to “Be impeccable with your word.”

“When you tell somebody you are going to do something, be sure you do it,” said Dingeldein.

The second agreement was to never “take anything personally.”

“Nothing others do is because of you,” he said. “What others say and do is a projection of their own reality…”

The third agreement given to the class was “don't make assumptions.”

“Communicate with others as clearly as you can to avoid misunderstandings, sadness and especially drama,” he said. “With just this one agreement you can completely transform your life.”

“Always do your best,” was the fourth and final agreement given to the Class of 2011.

“You are the example for our entire community,” he said. “When people see you in your cap and gown, when they attend your graduation celebrations, or when they see an article in the newspaper they are reminded that doing your best is always in your best interest. Your best is going to change from moment to moment… Under any circumstance, simply do your best…”

And in case the graduating class didn't know why they were at Commencement, Valedictorian John Brandt set them straight right off, “Guess what Class of 2011, we are graduating!”

“The uncertainty is very frightful,” he later noted about the future. “But, I assure you, everything will be alright. We're all happy tonight. This is one of our first big accomplishments in our lives and we have every reason to be happy for this accomplishment and it's a sad night because this might be the last night we see each other.”

“I also know someone who is going to marry and divorce Katy Perry but I won't say who,” he smiled.

Brandt left his fellow classmates with two statements before concluding his speech.

“One is a quote told to me by my mother that has gotten me through school and should help every one of you along the way as you travel through your education. She said to me every morning, 'Son, you are the most handsome boy in school and don't let anyone tell you differently.'”

His final statement was to say “Goodbye.”

“I will miss all of you very much,” he ended.

The ceremony ended with a song, “I'm Not Gonna Cry,” which was requested by the class.

The whole town gathered around;

Waiting 18 years now it's all comin' down to this;

I scanned the crowd and it fills my soul;

My best friends all here in rows;

This tassel is gonna turn;

But when the moment passes by;

But I'm not gonna cry, no

Not one sad tear or happy tear;

Yes, Cumberland High School Class of 2011 you are going to fly… so go out and soar!

Sarah Robinson was also awarded the David Goodman Memorial Scholarship in the amount of $500.

Fuqua School held commencement exercises for the Class of 2011 on Friday, May 20, on the lawn of the Upper... read more