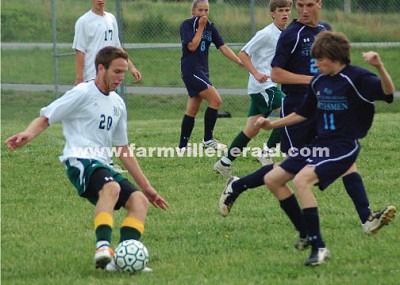 BUCKINGHAM – After playing to a tie in its first meeting a few weeks ago, the Buckingham County High School soccer team wanted to send an early message in its home match against Randolph-Henry on Wednesday afternoon.

It took about 45 seconds.

That's when BCHS junior forward Mike Amos connected on his first of three goals to help the Knights take an early advantage in what would end up being a 5-2 victory.

“When we played them down there, I don't think we played with a high intensity,” said BCHS head coach Chuck Meek. “With both teams being undefeated in the district, the team knew what was at stake and brought their game today.”

Amos' early goal put the Statesmen on their heels, both on the scoreboard and emotionally. Buckingham dominated possession for much of the half. When Randolph-Henry got the ball, Buckingham's defense did a good job of limiting their shots on freshman goalie Jason Conway.

Buckingham's overall speed advantage on offense was a little problematic for the Knights at first. Several good scoring chances were whistled dead due to offsides calls on Buckingham. Then, in the 21st minute, junior midfielder Peter Johnson broke through the R-H defensive line and poked a shot past the goalie from about five yards out to give the Knights a 2-0 lead.

It would stay that way into intermission, but like in the first half, Buckingham (5-1-1, 4-0-1 JRD) quickly struck in the second period. Amos was illegally tackled in the R-H penalty box, which gave Buckingham a penalty kick.

Junior Bobby Dandridge converted to give BC a 3-0 advantage, and seven minutes later, Amos scored his second goal.

A Randolph-Henry penalty kick in the 58th minute cut the BCHS lead to 4-1. Needing to rally, the Statesmen picked up the tempo on offense. Shot opportunities increased for the Statesmen, but it came at the expense of their defense.

Instead of backing down into a defensive formation, Buckingham remained aggressive, and in the 72nd minute, Amos scored his third on a breakaway to give the Knights a 5-1 lead and put the game out of reach.

Randolph-Henry responded with a goal on a hard shot in the 74th minute, but the Knights were able to ease to the victory from there.

“[Amos] has improved so much since last season,” said Meek when asked about his forward's hat trick. “He played travel ball, and that's really helped to refine and tune his skills. He has excellent footwork, and is probably the fastest player in the district.”

Meek was equally impressed with the play of the defense.

“I think they wanted the shut out, but they played very well. You have to credit Randolph-Henry though. So far, they're the only team to score against our defense. They have a good team.

“That early goal helped us to set the tone for the remainder of the day.”With the victory, Buckingham now has the advantage in the battle for the regular-season title. That's a big deal, as the district champ gets home-field advantage in the district tournament and a home match in the first round of the Region B Playoffs against the runners-up in the Dogwood District.

“That's a little too far off right for us right now,” said Meek. “Anything's possible, and our situation can quickly change. There have been some surprises in the district this year that point to that fact.

“We have to keep playing our game. Our style of soccer.”

Buckingham will travel to Amelia on Monday, and will host Cumberland next Wednesday, before wrapping up regular-season play at Central on Wednesday, May 18.