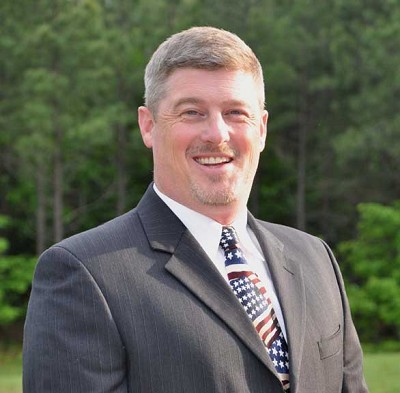 TOGA – Longwood University professor Brian Bates announced Thursday that he will run for the State Senate in the newly-created 22nd District, which includes Buckingham, Cumberland and Prince Edward, as well as Amherst, Appomattox, Fluvanna and Goochland, and parts of Louisa and Lynchburg.

Bates, a member of the Buckingham Board of Supervisors, will be seeking the Republican nomination from a field expected to be crowded. Bates is the second candidate to publicly and officially announce a bid for the incumbentless district this week.

The 22nd district was created by the General Assembly in their redistricting plan last week based on the 2010 Census results.

In a press release, Bates described his announcement as coming “within days of the culmination of his 11-year effort to bring the area its largest economic development project in history.

“The $600 million dollar Dominion Virginia Power Bear Garden Power Plant created 700 jobs since it was just a vision proposed by Bates, and he compared the local job creation to the 640,329 jobs that President Obama claimed to have created by spending $787 billion in stimulus money in 2009,” the press release states.

“At that rate, President Obama would have had to spend $86 million to create as many jobs as we did by bringing the power plant here,” Bates, a 12-year veteran of the Buckingham County Board of Supervisors, said in announcing his candidacy. “I learned the importance of watching every dollar as we stretched to provide for the poor during my decades working at my family's Caring Friends Food Pantry and during my 23 years of stretching dollars as a volunteer fire fighter.”

Bates, who grew up in Buckingham, lives with his wife Michele in the Toga area of the county near the geographic center of the sprawling district. The two other candidates for the spot include a Republican from the eastern tip of the district in Goochland, and a potential Democratic challenger in Lynchburg.

Bates, a professor at Longwood University, has family in Amherst, which with 16 percent of the district's population is the largest county in the district and has almost as many voters as the portion of the city of Lynchburg in the district (21 percent).

“Virginians are tired of politicians wasting their tax dollars, and I will insist that there is a good reason for every dollar we spend, just as I have in Buckingham and by helping other counties throughout the district through my work with the Commonwealth Regional Council,” Bates said. “I want to build on the successes we have had in improving the local economy despite the weak national economy by working with leaders throughout the district.”

Bates is a member of the LEAD Virginia class of 2006 as well as a 2007 graduate of the Political Leaders Program at the Thomas C. Sorensen Institute for Political Leadership at the University of Virginia.

The race is viewed as crucial to which party controls the State Senate, with Democrats currently holding a 22-18 advantage.