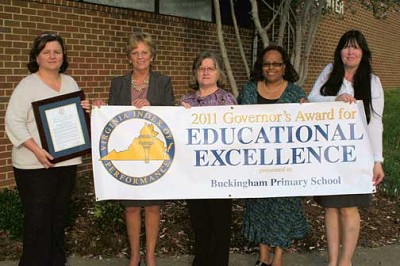 BUCKINGHAM – Nothing gets a school board meeting off to a good start better than showcasing student achievement or award-winning schools. On Wednesday, April 13, the meeting began with both.

A delightfully entertaining and educational performance by Buckingham Primary students opened the meeting.

BPS Principal Joan Staton explained that this year the school used its benchmark assessments for an enrichment and/or remediation program every other Friday. She said those programs have yielded activities that both the students and teachers have enjoyed.

“We've been having a lot of fun with these activities,” shared Staton, as she introduced Denise Leatherwood, library media specialist, and Stacie Pierce, computer lab aide, who planned the Famous Americans activity the students were presenting to the school board.

Staton said the students went to the library, researched certain famous Americans based on the SOLs, and then decided what they wanted to say about those individuals. She assured that the students would be highlighting what they thought was most relevant about their subjects.

One-by-one, the students dressed as famous Americans stepped through the time curtain to speak with a young news reporter. Not only did they share the successes of their Famous Americans but they also demonstrated that learning can be fun and creative.

Before presenting the awards, Matthews acknowledged that all six schools are fully accredited and full AYP, Adequate Yearly Progress.

To receive the Competence to Education Award, schools must meet all state and federal benchmarks for at least two consecutive years and be making progress toward the goals of the governor and board of education.

Praising the principal, staff, students and parents, Matthews presented the award to Wendy Spivey who accepted the award for Principal Jennifer Knight.

Superintendent Gary Blair offered a “hardy thank you for a job well done.”

Noting the criteria gets more difficult for Tier II, Matthews said eligible schools must earn a minimum of 80 VIP base points in each of the following content area-English/reading, math, science, and history and social science.

“We are very, very excited for them,” offered Matthews.

Sharing that he served as a middle school teacher and principal, Dr. Blair stated, “That is not easy.” He praised the dedication of the staff and students.

O'Brien responded, “Everyone at the middle school has worked so hard." She added, “And, we are so proud of this award.”

Buckingham Primary received the highest honor, the Tier I Governor's Award for Educational Excellence. To qualify for this award, a school must meet all state and federal achievement benchmarks for at least two consecutive years and achieve applicable excellence goals for elementary reading. Percentage of students passing the grade-three state reading assessment must meet or exceed 95 percent.

This is the second consecutive year the school has received the prestigious Tier I designation. During the 2008-09 school year, BPS earned the Tier II Excellence Award.

While Staton was at the podium to accept the award, Matthews said there was another presentation and brought out a banner announcing the award.

Staton shared, “I am really, really proud of my staff.” She thanked Dr. Blair and central office for their help. “It's teamwork-with everybody working together.” She also thanked the parents and the grandparents.

Blair told her, “Mrs. Staton, part of the magic of teaching here is that you make difficult look easy and effortless and it's not. It's hard work.”

Although it appeared the presentations were over, they were not. Matthews said there was a surprise and began reading a letter from Dr. Patricia Wright, Superintendent of Public Instruction for Virginia.

In the letter addressed to Dr. Blair, Wright wrote, “I am pleased to acknowledge the contributions to education Buckingham County public schools have made and to congratulate Buckingham Primary School for being selected to receive the 2011 Title I Distinguished School Award.”

Wright continued, “A school receives this distinguished award for achieving a mean score at the 60th percentile for both English and mathematics; for meeting AYP (adequate yearly progress requirements) for two consecutive years without safe harbor or proxy percentage for all students and in the subgroups; for reaching full accreditation in the second year of making AYP; and for exceeding the AMO for English and mathematics in the current and previous year for all students.”

She concluded, “The Virginia Department of Education values your division's exemplary accomplishments and expertise. Your continued dedication to students throughout your division is greatly appreciated. I extend best wishes for continued success for the 2010-2011 school year.”

When Matthews finished reading the congratulatory letter, she thanked Dr. Blair for everything he has done for Buckingham schools.

He replied, “They've done it all.”

Then, Matthews presented Staton with another framed award acknowledging Buckingham Primary as a Title I Distinguished School.

Matthews told Staton, “We are so very proud of you.”

Referencing all of the awards, Matthews offered, “You just can't get these if you are not making AYP and going above and beyond.” She added, “It takes everybody working hard. Thank you all.”