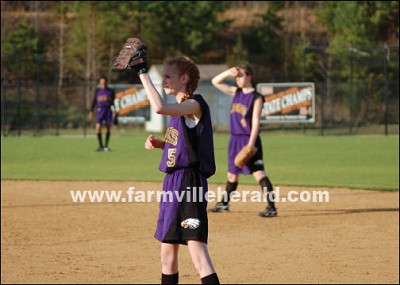 It was a tough day to say the least for the Prince Edward baseball and softball teams at Southside District front-runner Powhatan on Thursday afternoon.

The PE baseball team dropped a 20-0 decision in five innings, while the softball team was blanked 10-0 in six innings.

Though the games were shorter than regulation, it's easy to say that it was indeed a long day for both.

Powhatan's softball team scored three runs in the first, four in the third, and three more in the bottom of the sixth to bring the game to an early stop.

Meanwhile, Prince Edward was unable to get much going on offense. Brittany Jackson's single was the only hit in the second inning for the Lady Eagles on the afternoon. In all, two runners reached base, but PE was unable to get anything across.

From there, Powhatan shut the Lady Eagles down, while taking advantage of three fielding errors to break the game open in the bottom of the third.

“Powhatan is a very solid team,” said Meadows. “They throw strikes, field and hit the ball. Teams that do that will win almost every time. They find what they do well, and work to perfect it.”

Prince Edward senior pitcher Allison Dalton struck out three on the afternoon, while giving up 14 hits and walking none.

“We've got to be able to make plays in the field, and not take too many strikes at the plate,” said Meadows. “That's me. It starts at the top.”

Prince Edward, which played Friday afternoon at Bluestone, showed signs of strong play on defense, which in a way can be a little frustrating.

“We had a couple of innings where we showed that we're not bad, and we're not as bad as we showed today, but it's something that sometimes happens to teams that don't have much varsity experience. Still, we found that we're going to have to work on things if we want to be competitive.”

For the PE baseball team, things weren't any better. Powhatan scored 15 runs in the second inning.

Prince Edward was unable to get a hit off of PHS pitching.

“This is one you want to put behind you quickly and pretend like it didn't happen,” said PE baseball coach Michael Weaver. “As competitive as we have been this season, you just want to move on to the next one.”

Both teams played Bluestone on Friday afternoon, prior to taking a week off for Easter Vacation.

Following the break, PE will host Amelia in baseball on Tuesday April 26, and both teams will travel to Park View on Thursday, April 28.