PE Must Complete The Mission For Water 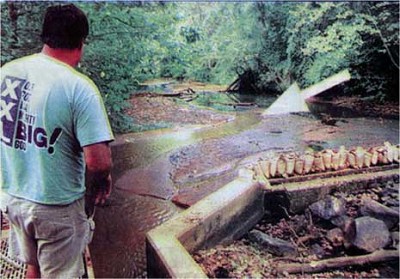 Farsightedness more than 40 years ago must not be blinded today.

Build the infrastructure necessary to tap into the Sandy River Reservoir at the earliest possible moment.

If that means Prince Edward County going it alone, so be it.

If it's the County and the Town of Farmville, let's do it.

Arguments against doing so fail to answer the crucial question: what do we do when we run out of water? Waiting until it's too late to build a pipeline is not the time to start building a pipeline.

The Town has offered the County a water deal that includes a partnership to access water from the reservoir and pump it to the Town's water treatment plant but at some later date-“at such time as the need exists”-and based on parameters that a proposed four-person committee would formulate. I applaud the Town of Farmville and Prince Edward County for their individual and collective initiative to address this critical issue but this is no time for delay. We've been waiting years to reach this moment. The answer is clear. To wait until someone decides, in the middle of a drought crisis, that the pipeline is needed will be too late. When water is about to run out nobody will have time to wait a year-plus for construction. After the Titanic hits the bottom of the ocean is no time to be filling lifeboats.

Arguments against the proposed County water system miss the only fact that matters-the water is needed to assure the long-term survival of this community, which is based on the survival of Farmville and everything served by its water system. Throw economic development and growth in the county out of the window, if you like. The water is needed simply to protect and sustain what we already have-a public school system, a hospital, a university, homes, businesses, the overwhelming majority of jobs in this county and most of the tax base. That affects everyone, whether you live in the Prospect, Leigh, Lockett, Hampden, Buffalo or Farmville Districts. The heart of Prince Edward is undeniably Farmville and Prince Edward County's arms and legs won't move, nor its lungs breathe, if that heart stops beating because there is no more water.

If Farmville runs out of water, Prince Edward County runs out of water. A pipeline to Farmville would be a major component of the County water system, in addition to creating the ability to extend water lines into the County, and that, alone, justifies the project. If this is what it takes, do it, and remember that the Farmville District will produce more tax revenue to pay for the project than any other district in the county, as the Farmville District does already for everything Prince Edward undertakes.

A shared temporary sacrifice for the greater good, such as the assured long-term survival of an entire community, is a noble cause in human history. If taxes were raised, and if they were not, future generations of Prince Edward County residents would bless the day, not curse it, when their water supply was assured by the Board of Supervisors in 2011.

And a County water system would also be able to extend waterlines to residents across the county, in every district-from Rice to Prospect-who in the years ahead will become more and more vulnerable to wells going dry as the water table continues to shrink. In the decades to come, the ability to extend waterlines into the county will prove vital and, yes, it will help boost economic development, too.

Speaking of prices, if losing the next election is the price some members of the Board of Supervisors pay for going down in history as assuring the survival of Prince Edward County that burden is not so heavy. Saving your seat and selling out Prince Edward County's survival? That's the price you don't want history to remember you paying. But you may win the election in addition to winning the county's future.

Of course it would be better if the County and the Town of Farmville cooperated by creating a water authority based on the Town's water treatment plant (using the Town's current employees), a pipeline from the reservoir and waterlines out into the county. It would cost less to use an upgraded Town Water Treatment Plant and share other infrastructure costs to get the water from the Sandy River Reservoir. But that level of partnership seems out of reach. A County water system appears to be the only way, within our grasp, to effectively tap into the Sandy River Reservoir, which is this community's only guaranteed drought-proof water supply. This community must complete the mission the people of Prince Edward County set for it more than four decades ago.

Twice, in 1971 and 1983, Prince Edward County voters overwhelmingly passed referendums to borrow money to construct the reservoir as the community's future water source. Though it will be expensive, Prince Edward County can now afford to build a water treatment plant and pipelines to allow the Sandy River Reservoir to fulfill its destiny.

Make no mistake, what Prince Edward County cannot afford is to play Russian roulette with its survival, betting that the future will produce nothing more frightening than a fully loaded water pistol.

Look at the 2002 photograph accompanying this editorial. The white arrow points to the irrefutable wisdom of Prince Edward County and its residents more than 40 years ago. The Appomattox River is an emaciated ghost of itself, hardly a yard wide. I took that photograph and I will never forget what it felt like to stand straddling a small stream upon which Prince Edward's heart and soul and lungs depend. Looking upstream and downstream was like looking up and down a dirt road, not a river. Even if you close your eyes and bury your head in the sand-and droughts can create plenty of sand-the Appomattox River in 2002 will still be a dribble.

There were stopgap measures put in place by the Town of Farmville and thank God for Town officials doing so. They helped save the day. But what would have happened if the 2002 drought had sustained itself?

Those emergency measures still remain and the Town has added to them, or plans to. I am glad and I respect those wise actions that may well assure survival through a terrible drought, even though any drought bad enough to threaten the Appomattox River and its watershed will do the very same thing to Buffalo Creek and its watershed.

What this community needs is what it is fortunate enough to possess in the Sandy River Reservoir-a guaranteed source of water against a chronic low-water drought situation. Emptying a lake or watershed impoundments-if the necessary state permits are provided-could well save the day if enough water doesn't evaporate or become absorbed by the earth as it finds its way downstream and eventually to the water treatment plant.

More than one day must be saved, however, which is the point.

All of the days ahead must be saved.

What happens if another severe drought comes before the emptied lakes and watershed impoundments are able to refill?

It will be far too late to begin building a pipeline from the Sandy River Reservoir to save that day or the days that follow. The arguments against a County water system do not answer this question, and it is the question that matters most.

Less than a decade ago we watched a drought turn the Appomattox River into a trickle that scared the pants and skirts off everybody. They saw in real life what that photograph above can only begin to explain and immediate steps began to be taken toward a Sandy River Reservoir Pipeline. Now, however, lots of people have bought all kinds of new pants and skirts and apparently can't remember how close the Appomattox River came to disappearing before our very eyes.

The truth is standing there naked.

The Sandy River Reservoir is the only answer.

The mission has been decades in the making.

Don't abort it now just when it matters most.

Arguments against a County water system miss the key point and never satisfactorily answer this question:

What are we going to do when we run out of water?

If we keep huffing and puffing we're going to blow our own house down.

Don't be the little boy or girl who never cries wolf.

Sometimes there is a wolf.