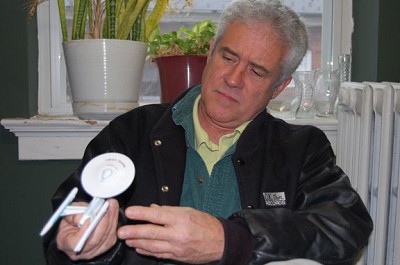 DARLINGTON HEIGHTS – Lady Gaga may be number one on Billboard's Hot 100 this week but Tray Eppes has NASA going gaga over “Rocket Scientist” and if America agrees his song will be blasted into orbit.

Stay-tuned. Eppes may be out to launch.

NASA has narrowed down a competitive field of 1,350 original songs to a final top 10. The biggest vote getter in the on-line contest will be played to wake up the astronauts orbiting Earth on the Space Shuttle Endeavor later this month.

And one of those top ten tunes is written and performed by Eppes, who has been making records and playing concerts for years, in addition to crafting his pottery.

Fittingly, an actual NASA rocket scientist inspired the song and there is even a special dance favored by NASA employees in the Tidewater area and other Eppes aficionados.

“I'm not making any money off this. If it gets me on Letterman,” Eppes said with a big twinkle in his eyes, “that's really cool.”

Though his song may go into orbit, Eppes' feet are firmly on the ground.

“That's not going to happen either,” he said of a Letterman gig, “but we do it for fun.”

On-line voting by the public will continue through April 19, when the shuttle is scheduled to lift off.

The wake-up song has become a NASA tradition and family members of the astronauts normally pick the daily tune for the musical alarm clock.

NASA decided on a change of pace for Endeavor's final mission and it was NASA personnel who narrowed the contest field down to the final top ten out of the 1,350 entries.

“I went right to the top and then this other song came up and passed me yesterday. I totally expected to stay in the lead the whole time,” Eppes said of the voting that began last week on the finalists.

As The Herald was going to press, “Rocket Scientist” was in third place, with 20.4 percent of the votes, or 52,267 votes. The first and second place songs had 34 and 33 percent of the vote, respectively, and the other seven songs aren't even close.

“The girl's got style. She's got wit and grace.

One look sends me into outer space.

She could work for NASA. I believe she does.

Takes me for a ride in the wind tunnel of love.

I dream at night of her jet-powered kiss.

My baby's a Rocket Scientist”

“I have a large group of friends that play music in Tidewater, all over, but there's a large group of them in Tidewater. One of them, Kelly Murphy, works for NASA and is a rocket scientist,” Eppes says of the song's origins. “She does trajectory and wind tunnel tests on her laptop.

“She's just brilliant. She's beautiful, she sings and plays. We play music together,” he continues, but it took a mutual friend to see the song potential of a rocket scientist.

“I write songs about my dog, about cooking,” Eppes said, and his friend, he recalls, pointed out to him, “Tray, you've got a friend who's a rocket scientist. You've got to write a song.'”

So about eight years ago he did and “Rocket Scientist” appeared on Eppes' 2005 CD It's No Act.

“If it's brains you want, she's got plenty.

Compared to her I don't have any.

But when it comes to loving we do just fine.

I can't believe that girl is mine.

My baby's a Rocket Scientist.”

“Just little rhymes like that,” Eppes said, reciting some of the lyrics, “and I find when I introduce the song in concerts that seems to be a theme that people relate to.

What prompted Eppes to enter the contest? The very woman who provided the inspiration for the song, itself.

“Kelly, the rocket scientist, emailed me and said, 'Have you seen this (the NASA contest)? How perfect is your song?'” she asked him about “Rocket Scientist.”

“I played it in concert in Norfolk and a bunch of her NASA friends were there and they went crazy. There's this “Rocket Scientist” dance where the girls…do this little thing (Eppes demonstrates) and Kelly gave me the verbiage (of the dance) and it emulates the staging of the space shuttle configuration at launch where it separates,” he said, staging his configuration.

“Do these other songs,” he playfully wonders, “have dances?”

Eppes can imagine what it would be like to hear his song broadcast to the astronauts in space? And he can see it, too.

“Yeah…I would really like,” he says enthusiastically, “to see the astronauts, I would like to get a video of the astronauts doing the dance in zero gravity.”

One small request by a man.

Eppes actually made the zero-g dance suggestion to a NASA representative coordinating the contest.

But Eppes didn't refrain from refraining the weightless suggestion.

“And I went 'No, no, no, I've seen them doing some crazy stuff up there. They could take time to do the dance.'”

As with much on-line ballot casting, voters in this contest can vote as often as they want.

Eppes says he was “hoping for one-person one-vote” but he guesses there are some folks voting over and over and over again for the song which overtook “Rocket Scientist.”

Some of his own friends, he knows, are voting like democracy on caffeine-more than once.

Eppes actually voted a few times for his own song, himself, but says with a straight face that one of the votes was cast on behalf of his dog, which would certainly vote for “Rocket Scientist.”

Naturally. Man's best friend would do nothing less.

The songwriter is having fun with the contest and enjoying the experience and notoriety.

“Because it brings a little bit of focus, certainly, to this area,” he said, adding “and it has drawn a great deal of attention to me as a songwriter, and that's kind of cool.”

Eppes has paid for business-size cards to promote his song in the contest, easy to put in someone's hand, giving them the song title and NASA's website information.

“I fully expected just to walk away (with the contest),” said Eppes with the confidence that necessarily comes from performing original songs in public. “I haven't heard all the (contest's) songs but you know I love that quote from my grandmother-it's a poor dog that don't wag its own tail.”

Even in zero gravity.