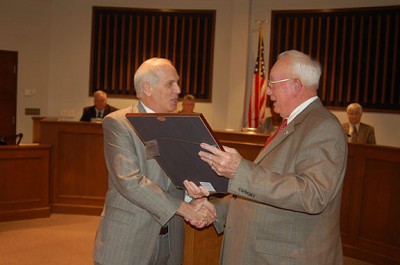 PRINCE EDWARD – Supervisors met in a budget work session March 29, but numbers weren't all they had on the agenda.

The board, having previously approved a resolution of respect for retiring Judge Richard S. Blanton, presented him with a framed copy of the resolution, which was read by Board Chairman William “Buckie” Fore.

“…During his tenure as Circuit Court Judge, the Honorable Richard S. Blanton has heard a variety of cases, presiding with great decorum, honor, and commitment to equal justice for all…,” the resolution reads in part. “…Therefore, be it resolved, that the Board of Supervisors of the County of Prince Edward, Virginia does hereby convey its high regard to a singularly dedicated, distinguished and accomplished Virginian, the Honorable Richard S. Blanton…”

His retirement was effective March 31.

“…I've been associated now, I think, with Prince Edward County directly for the last 22 years,” Judge Blanton commented. “I was thinking about that. Sixteen years as judge and then, prior to that, six years as county attorney and it's been a real honor, both of those positions.”

He added, “I certainly enjoyed having my office in the courthouse building for the last 16 years and I think…I will miss that office and the association with everybody on a regular basis. But I really do appreciate this. It's been an honor to serve as a judge. I became eligible for retirement in December. My term ends April 1. It just seemed time to step aside and let somebody else have a turn at it.”

Judge Blanton also reflected that 16 years ago, Prince Edward's board of supervisors passed a resolution supporting him for the judgeship and sent it to the General Assembly “and I've never forgotten that.”