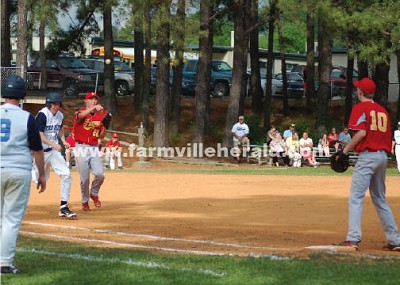 FARMVILLE – For most of the afternoon, it looked like it was going to be a frustrating outing for the Fuqua School baseball team in its Tuesday afternoon home contest against Tidewater Academy. Hard hit balls by the Falcons were finding TA fielders, while the Warriors were seemingly getting all the breaks early on.

That all changed in the bottom of the sixth, however, as the Falcons erupted for five runs to take the lead and hold on for a 6-5 victory. A two-out, two-run triple by pitcher Davis Cyrus gave the Falcons their first lead of the day.

Cyrus capped his complete-game effort on the mound in the top of the seventh by getting a two-on, two-out fly ball to center field.

“The score really didn't do Davis justice,” said FS head coach Ted Cunningham. “A lot of the hits he gave up – especially early on – were seeing-eye hits. I'm proud of him for hanging in there, and for the whole team for that matter. This was a game that we would've probably lost a year ago.”

Fuqua (7-5, 7-5 VCC) had trouble – especially early on – stringing together hits offensively, and left the bases loaded in the first and third innings.

Fuqua scored one run in the bottom of the fifth. Andrew Ware led off the inning with a single, stole second and advanced to third on a wild pitch, before coming home when Cyrus reached base on a two-out pop-up that was misfielded by the pitcher.

Then, with two out and Coty Hanks on first, the Falcons finally got the break they were looking for. After a Tidewater pitching change, Jai Jamerson made just enough contact to put the ball in play about five feet up the third base line.

Instead of allowing the ball to roll foul, Tidewater's catcher decided to field it, but his throw to first was not in time to beat the speedy Jamerson. A single by Ware loaded the bases, and another by Cunningham knocked in Hanks and Jamerson to cut TA's lead to 5-3. Another single by Will Holman scored Ware, and set up Cyrus for his two-run triple that gave the Falcons the lead.

Ware led the Falcons at the plate by going 3-3 with two runs scored. Carter Cunningham was 2-3 with a walk, a run scored and an RBI, while Cyrus was 1-3 with a walk and a triple and two RBI, but reached base three times on the afternoon.

On the mound, Cyrus went the distance, allowing five runs on ten hits while walking four and striking out 11 Tidewater hitters.

“With us playing three games this week, I originally thought I'd pitch Davis a few innings so he could come back and pitch on Thursday, but he was throwing well enough that I decided to leave him in there,” said Ted Cunningham. “By getting the complete game, we probably won't be able to use him again, but we still have the rest of our staff available to us.”

BLACKSTONE – The Fuqua School baseball team won its fifth of its last six contests on Wednesday afternoon at Kenston Forest. The Falcons (8-5, 8-5 VCC) avenged an earlier loss to the Kavaliers in Farmville with a 14-3 victory in five innings.

Fuqua fell behind 3-2 after the first inning, but quickly reversed course by scoring four runs in the second inning and seven more in the top of the third to blow the game open.

“We settled down after the first inning,” said Ted Cunningham. “I guess we were a little jittery, and gave them a couple outs in that first inning. I'm glad we started to play defensively sound baseball after that first inning, but we're going to figure out a way to settle down before we hit the field.”

Cunningham was pleased with the production from his lineup from top to bottom.

“We got good production from almost everyone, and overall we played pretty well.”

Carter Cunningham led the Falcons at the plate with two home runs on the afternoon – a solo shot in the first, and a three-run home run in the second.

Jai Jamerson went the distance in the victory. He gave up three runs on six hits, walked four and struck out one. Fuqua's defense backed him up with just one charged error on the afternoon (in the first inning).

The Falcons were scheduled to travel to Brunswick Academy on Thursday afternoon, before traveling to Blessed Sacrament-Huguenot on May 3.

“We still have a shot at the third or fourth spot in the tournament,” said Cunningham. “Steward and Tidewater have pretty much nailed down the top two spots, but with a strong finish, we could grab that third spot.”