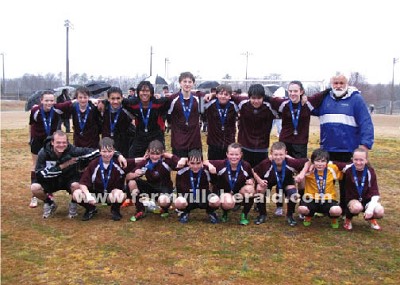 The Heart of Virginia Soccer Club's Thunder U-13 team was crowned division champions in the Chesterfield United Icebreaker Tournament after shutting out Richmond Kickers North in a 3-0 victory.

According to Head Coach Alex Spirn, this was the team's first victory in a large scale event, although the team has reached the championship round in other tournaments.

“This weekend was a test of our composure, ability, and above all else, heart,” said Spirn. “Our kids train hard, pay attention to every detail, and they do it all with a smile. We must now carry this momentum into the season.” Spirn is assisted by Coach Bob Buczek.

Heart of Virginia Soccer Club President Bob Burke acknowledges that this is a milestone for the team.

“Our U-13 team was able to compete against the best clubs from the Richmond area. It really speaks to the quality of our coaching and the talent level of our players.”

The club has formed a connection with the Longwood University men's soccer program. Longwood coaches and players generously volunteer their time to assist with player development.

Heart of Virginia Soccer Club is a travel league based in Farmville, and teams currently play in the SOCA Skyline travel soccer league.

The club fields teams up to the U-18 level and has representation from nine counties including Prince Edward, Cumberland, Buckingham, Appomattox, Amelia, and Nottoway.

Heart of Virginia Soccer Club will hold tryouts for the 2011/2012 season this summer. For more information about tryouts, look on the organization's website, www.heartofvirginiasoccerclub.com.