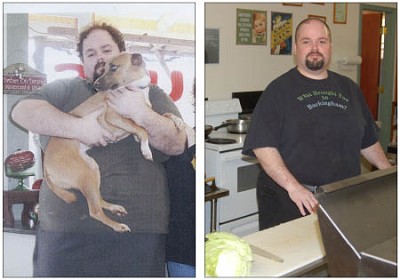 BUCKINGHAM – Jeff Sheffer is a chef.

“If I don't like it, it doesn't get on the menu,” he said in an interview from a table inside his convenience store/restaurant off of U.S. Rt. 15 near Willis Mountain.

Sheffer, 37, has watched his business steadily grow in the last couple of years but he is a success story in progress, not just for what is going on behind the counter and the grill, but for what he's accomplishing in his life.

“…I had to make time for myself to do things,” says Jeff, who has been known to put in 90-hour weeks.

He remembers the day, October 21, 2009, when he decided to change his life. He had had one too many sodas, he recounted, and he could feel the swelling in his leg “and it was like the most uncomfortable feeling I ever had so I made a decision to change my life. And, the funny thing is, it was the first time in my life that I had actually decided to do something.”

He reflects, “It took me 36 years to decide to change my life.”

These days, Jeff can still be seen behind the counter of Wise Ridge Country Store, which is also where he lives. But, just over a year ago, the first steps of the journey began when he stopped drinking sodas.

“The key to this was the fact that I took time in between things that I was eliminating,” Jeff details. “It was about a month and a half before I decided to go through my store and say-tick off a list like I can't eat potato chips; they're no longer on my diet. Mayonnaise isn't on my diet. At that point I decided I wasn't gonna eat after eight o'clock at night and I started eating more fruits and vegetables and I decided…to look at it like I am going to be 200 pounds lighter. I'm not losing weight, I'm just gonna be 200 pounds lighter.”

It is a noble goal for a chef, whose most popular order is a steak and cheese sandwich and whose shop also sells pastries and such, but battles are there to be won.

And Jeff is determined.

As of our visit, he had lost 102 pounds, checking in at 308. This year, Jeff figures he'll lose between 50-75 pounds with the balance of his 200-pound goal the following year.

The first time he noticed, he says, is one day he pulled out his license and it didn't look like him any more.

There's an invisible line at the doorstep of a gym. It's a line that can be difficult to cross that first time.

“Walking into the gym the first time is really awkward, especially for a heavyset person,” Jeff said. “By nature, I am an introvert so I like my own company more than other people, at times. And it wasn't that I'm anti-social, it's that I never thought I actually deserved to have that relationship with other people so I would not…go out of my way to make those relationships. So, going into a gym when you're a heavyset person who is anti-social is very hard because you walk in and you see all these beautiful people and it's like you're not one of them.”

Still, he has found nice, encouraging folks at the Y.

He started by walking alone on the treadmill and within about a month and a half he was down some 53 pounds and he says started to feel a difference.

In May, Jeff took it up another notch by going into the pool for the first time. By then, he was fitting into a pair of 4x swim trunks that he had had for over ten years. (Jeff says he hadn't been in the pool in ten years). He swam about a half lap that first time, discovering that he couldn't breathe and had to slow down.

“So what I ended up doing was taking one lap, taking a break for about half a minute swimming back and forth for that and doing in total about 12 laps for a half hour. And I would do a half hour in the pool and get out and do the treadmill for a mile,” he said.

He still has a regular routine, but Jeff has gradually increased the number of laps between breaks-to three laps before a break, then five, and his personal best is 25 laps in about 35 minutes. On May 3-a year from the day he re-entered the pool, he plans to swim a mile, or 33 laps.

The steady work has paid off; now he's trimmed down to 2x swim trunks.

Jeff sits at the table with pants that are too big. He's had to add another hole in his belt. The pants he's wearing are 52s, which he says he hasn't fit in in seven years.

“…The thing is I told everybody when this started that I'm wearing clothing with a drawstring because I'm not gonna replace my pants-not yet,” Jeff laughs. “It's stupid, but why am I gonna replace 'em when I…have a way to go?”

The other day, he details, he took a bag of size 60 pants 5xs to Goodwill and donated a bag of good condition dress clothing. He offers “that I am never gonna wear (them) again because I am not gonna go back. For me, it's a way of thinking, it's more of the fact that I am gonna be 200 pounds lighter. I have not lost any weight, because I'm not looking to find it again.”

He notes, “When I made the decision, I decided I did not need to be heavy any more.”

As far as being an introvert, Jeff says he found creative ways to get to know folks at the Y. He pretty much shared his story with one of the workers behind the counter who he found to be nice and encouraging and still cheers him on. He also started talking to the lifeguards, telling them his story.

“…It wasn't so that I would feel better about myself, but so that they would not take for granted the fact…of how physically fit they were because anything can change in your life,” Jeff says. “Anything.”

He is getting out of his comfort zone, even bringing pizza for the staff on one occasion.

“You would think that being with the public here every single day would make it so that I can actually talk to people easily. I can't. If I am uncomfortable with someone, I just can't approach 'em,” Jeff said.

It's been a journey that has been more than about the body, but the person.

“…If my body is whole and healthy and my person is not, I'm just gonna go back to old habits and I have to heal one to heal them both. I have to heal both at the same time or it's just not gonna work. So…for me it's been more of getting out of my comfort zone, meeting people and realizing that yes, this is a good thing, I do belong at the gym…not everybody's gonna look at me…and say 'OK, you're a fat person, you're gonna be here for a week and then that's it,'” Jeff said.

Jeff had been to three other gyms in his life, with each experience lasting about two to three weeks. He had never made up his mind to do it, he says. It was other people pushing him into the fact that it needed to be done.

While it needed to be done, he reflects, he hadn't decided to do it.

Now, he no longer eats after 7 p.m. (most of the time he won't eat after 5:30). He says he doesn't miss potato chips (he hasn't had a full bag of the 99-cent bag of chips since November of 2009), though he'll have corn chips once in awhile. He also allows himself some pastries every once in awhile, but it's not a big thing for him. Jeff says he never was a big cake person.

On this day, lunch included a steak sandwich and two oranges.

“…If you set your mind to it, it's not as hard as you think,” Jeff said. “The worst time I ever had was the first night I decided not to eat after 8 o'clock. You have to realize I would go and get two glass bottles of RC Cola and a bag of potato chips and eat those after I closed. That as my nightly dinner.”

He didn't want to mess up that first night, so he went to bed. Now, after 5:30-6 o'clock at night, he says he's just not hungry any more.

He doesn't try to push his beliefs on anyone; until they make the decision themselves, it's just not going to happen.

“Everybody tells me how proud of me they are and how much I'm coming along but…I tell them outright, until you make the decision, it's all you,” Jeff said.

He also noted, “…What I want people to get out of this is the fact that people need to realize that they need to set their mind to something and if they do, they can get it. It's basically a way of thinking, because if you want something bad enough and you decide to do it, then it is possible.”

It's something from inside.

“You have to know that it's possible. If you think it is impossible for you to do this,” Jeff said, “then it is.”