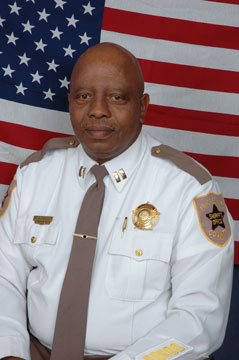 PRINCE EDWARD – Captain Wesley W. Reed, Chief Deputy with the Prince Edward County Sheriff's Office, announces that he is a candidate to succeed retiring Sheriff Travis D. Harris Jr. Capt. Reed, a native of Prince Edward County, has been employed in the Sheriff's Office full-time since 1985. He worked in every area of the department, from dispatcher to field deputy to investigator, before being appointed chief deputy in 2000.

Capt. Reed states, “From childhood I wanted to be a police officer. My experience has fully prepared me to become Sheriff. I look forward to expanding on the achievements of Sheriff Harris, who has served the County and the Commonwealth so well.”

Reed plans to run in the Democratic Primary, which is set for August 23.

As Chief Deputy, Capt. Reed supervises the day-to-day management of the Sheriff's Office. He serves as Special Events Coordinator for Security and as Crisis Team member at the Prince Edward County Public Schools. He is also Neighborhood Watch Coordinator. Among his other primary duties, he serves as media contact and liaison with the Virginia State Police and other agencies.

Capt. Reed states in his press release that as sheriff he will “maintain the high degree of professionalism fostered by Sheriff Harris. He will continue his leadership of the Neighborhood Watch program, with the goal of establishing effective groups in every voting district, building on existing neighborhood connections. He will complete the state accreditation process of the Sheriff's Office and enhance communication between the Sheriff's Office and other law-enforcement agencies, including the police departments of the Town of Farmville, Longwood University, and Hampden-Sydney College.”

Reed graduated from Prince Edward County High School and holds a certificate from the Central Virginia Criminal Justice Academy. He continues law enforcement training opportunities, most recently receiving certification as Background Investigator, Accreditation Assessor, and Property and Evidence Manager. He has completed the highest level of training in Incident Command Systems, preparing him to deal with incidents of terrorism and other crises.

Reed has been married for 32 years to Joyce Thompson Reed. They have three children and nine grandchildren and make their home in the Leigh District of the County. He is involved in all aspects of the Prince Edward community, as a Trustee at Levi Baptist Church, a member of the Meherrin Fire Department Volunteer Auxiliary, a member of the New Bethel Community Male Chorus, and Past Master for Randolph Masonic Lodge in Farmville.