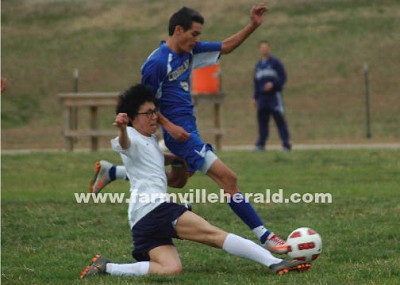 POWHATAN – Possession may be nine-tenths of the law, but the Cumberland High School soccer team found that not to be the case in sports.

The Dukes controlled possession for much of their non-district match at Blessed Sacrament-Huguenot on Wednesday, but still came away with a 3-2 loss in overtime.

Two late defensive breakdowns (one in each overtime period) led to a pair of goals that allowed BS-H to take a 3-1 lead with minutes to play.

A goal by CHS sophomore Alex Bapties with about 90 seconds remaining pulled the Dukes back to within one, but two bids to force the tie (one coming on a direct kick from just outside the penalty box) went wide, sending CHS to its second defeat of the season.

“We possessed, possessed and possessed, but we couldn't finish,” said Cumberland head coach Heather Storrie. “That's the luck of soccer. It's an unlucky game.”

After taking a 1-0 lead about 12 minutes in on a breakaway goal by CHS senior forward Brandon Kresge, the Dukes continued to control the ball, and had several chances to extend their lead.

On one corner kick, the ball even hit the bottom of the crossbar, and bounced straight down on the goal line, before being yanked back by the BS-H goalie.

In soccer, the ball remains in play until it completely crosses any line, including the one under the goal.

Minutes later, the Knights tied the contest early on in stoppage time.

“That goal, and the two we gave up in overtime, is a good indicator of fatigue,” said Storrie. “Both mental and physical. We're going to have to work on our fitness.”

The second half played out much like the first in that Cumberland dominated possession, and had several good scoring opportunities.

In an eight-minute stretch midway through the second period, the Dukes saw four scoring opportunities go by the boards.

In the final ten minutes of regulation, momentum switched back to the hosts, who had three opportunities of their own.

“Today's game was quite similar to how things played out on Monday [against Bluestone],” said Storrie, on the Dukes' 3-1 loss to the Barons. “We had a large number of opportunities and failed to cash in on them, while they had a few, but made the most of theirs.”

Cumberland enters the 2011 season in defense of its James River District championship. The Dukes claimed the regular-season title, but came up short to Randolph-Henry in the JRD Tournament. CHS lost a fair amount from last year's veteran-heavy squad, but Storrie believes the team returns enough of its nucleus to make another run at the title.

“That's our goal. We want to defend the regular-season title, and back it up with the tournament championship.

“We did lose a lot, but we have a lot coming back. We have a group of strong seniors and some youth. The seniors have really helped us in molding the younger players, that's something every coach likes to see.”

One position affected by Cumberland's losses from 2010 is in goal. Jeremy Nelson, who was a forward on last year's team will handle keeper duties this season.

“He's played goalie on his club team, and has done well. I think he has what it takes to be a keeper, and be a leader.”