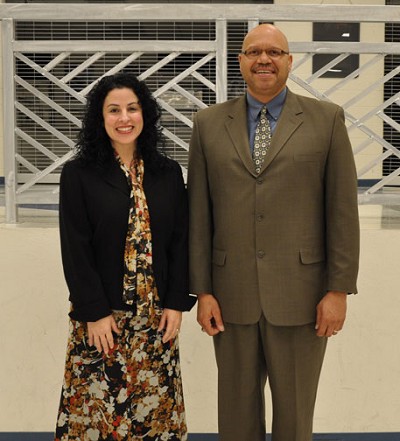 Bernice Ford, current Elementary School principal, will be moving to the school division's Central Office in July to take on the role as Supervisor of Special Education, according to a previous announcement made last month by the School Board.

After the School Board's Chair, Dr. Christine Ross, made the announcement the Board welcomed Scales and Ms. Gills back to Cumberland.

According to a press release sent to The Herald after the meeting, Scales has nine years of administrative experience and currently serves as Assistant Principal of Fluvanna High School.

He also has teaching experience at the elementary, middle, and high school level. In addition, he has served as the athletic director and assistant principal for Cumberland County Public Schools in the past.

He lives in Cumberland has been active in the school and community events.

Ms. Gills holds a Bachelor of Arts Degree in Spanish, a Master of Science Degree in Culture and Literacy for certification as a reading specialist, an endorsement as a teacher of English as a second language, and a post-master's certification in Educational Leadership in Administration and Supervision, according to the release.

She currently teaches at Powhatan High School where she has previously served as chair of the Spanish Department.

Ms. Gills has also been a teacher of Spanish at Cumberland County Public Schools and presently resides in the County.

“I'd like to congratulate Jeff Scales and Ms. Gills on their recent appointment to the Elementary School,” offered School Board member George Reid Jr. during the Board's comment segment.

“We look forward to wonderful things,” she said. “And we want to thank the former Principal and Assistant Principal for all your hard work that you've done and the progress you've made there at the Elementary School. We look forward to the next generation carrying it on.”

The School Board later adopted the school calendar for the upcoming year.

The calendar includes ten teacher in-service/workdays, which are to be used for staff development and 180 instructional days.

The Board also adopted a revised FOIA policy (KBA-R).

The changes occurred in the rates section of the policy.

According to the policy, depending on the search time and the number of staff members involved the rates of $3.05 to $5.46 per quarter hour may apply.

The Cumberland County Public Schools division will be hosting the 2011 Virginia School Board Association Southside Regional Forum on Thursday, March 17 where approximately 100 representatives from each of the school divisions in the region will be in Cumberland.

“I'm looking forward to when we have the…conference here,” said Reid. “When all of the school divisions in our district will be in little ol' Cumberland.”

“She's also going to different organizations and doing presentations,” she said about Dr. Griffin spreading the school's mission. “She's really going out into the community to show the community what our school system is all about and it's about a wonderful, positive place to be.”

School Board member George Dowdy III apologized for not making it to the scheduled public hearing earlier this month.

“…That's not an excuse I'm making but that's what happened and I do apologize for that,” he said after explaining the circumstances involved.

Later, School Board member Doris Seal thanked Barbara Moore for her time spent in Cumberland and wished her well in her retirement.

Ms. Moore has been working in the Central Office as Supervisor of Special Education.