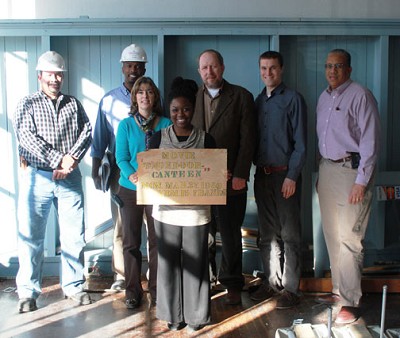 As if hidden in a time capsule, the small cardboard poster advertised “Movie 'Stagedoor Canteen' Mon. March 27, 1950” in hand-stenciled lettering. The movie was made during the Second World War and celebrated the “Stage Door Canteen” in New York City created as a recreational center for servicemen on leave who often saw top celebrities entertain or serve them.

“The construction workers found the sign behind the bookshelf in the room that used to be the library,” Moton Museum Program Coordinator Patrice Carter said.

Thirteen months after students saw Stage Door Canteen they witnessed history made from the school's own stage, students taking the first steps toward changing the face of American public education, and so the nation, itself.

The school was on the way to becoming a National Historic Landmark and a museum anchoring the dozen-plus-locality Civil Rights In Education Heritage Trail.

Unsurprisingly, excitement and anticipation are in the air at the museum as the April 23 60th anniversary of the historic student strike approaches.

Hardhat-wearing experts from Prestige Construction are at work, revealing the past and renovating for the future of the museum which, when it was R. R. Moton High School, saw teenaged Barbara Johns lead, with the help of key classmates, that historic strike in 1951 against separate and unequal facilities. Most of the other students have not been publicly recognized individually here for their historic roles-until now.

On Tuesday, The Herald asked John A. Stokes, a key member of the student strike planning committee and author of the National Geographic-published Students On Strike: Jim Crow, Civil Rights, Brown and Me, to share the names of those involved, so that credit might be publicly given as the 60th anniversary approaches.

“This is the group that started the situation. Remember, it started with only a few of us…We picked others to join us as we moved forward,” Stokes told The Herald in an email with the two lists.

Barbara Johns believed John Stokes and his sister Carrie were vital to any plan, according to They Closed Their Schools, by Bob Smith. On page 32 Smith writes: “One of the first students Barbara Johns thought of was John Stokes. Any planning would have to include him, and he and his sister, Carrie, would have to be in favor of the plan.” In a Wednesday email, Stokes told The Herald, “our mission was to strategize, design and carry out schemes to successfully accomplish tasks that had never ever been attempted.

I still feel humbled, blessed and honored that Barbara felt this way.”

Stokes told The Herald, “I code-named it (the student strike) The Manhattan Project. Each task force member/project member carried out his/her responsibility to the letter. We shall forever be grateful to them and also all plaintiffs and community members who had the courage-foresight-audacity to stand with us and to permit their names to go public.”

“This is the original group that did the initial groundwork for the strike on 23 April 1951,” Stokes said in the email.

“This list is slightly different from the original group,” Stokes notes, adding that “of the five cases in Brown versus The Board of Education Prince Edward County, Farmville, Virginia is the only case that was led by students.”

The resulting legal action against public school segregation, whether the facilities were equal or not, led to Prince Edward County's pivotal inclusion in that landmark 1954 Brown v. Board of Education decision by the United States Supreme Court.

Moton Museum Director Lacy Ward, Jr. is eager to share what the museum will have to offer as the 60th anniversary of that American history is observed and celebrated.

“There's been a lot of activity, and I want (visitors) to get an understanding of what we have done, and what we have yet to do, and what the ongoing challenges to reach completion are,” Ward said recently.

Amid the clanging and clamor of construction, he outlined what to expect when the dust clears and visitors can tour the newly-installed interpretive galleries. StudioAmmons, Inc created the innovative educational and interactive design for these galleries.

Walking into the museum from the parking lot, the former library is on the right and is being converted into the educational gift shop and resource center.

“Everything on this side of the museum will be completed by July,” Ward explained. The hallway leads to the auditorium where students began the dramatic walk-out that some regard as the birth of the civil rights movement.

These sneak peek tours will include daily screenings of the film “Strike!: April 23, 1951” by filmmaker Tim Reid, along with other activities.

Moton 2011 will feature six galleries that will be installed through funding raised from public and private donors.

Ward said a major challenge “is to find an additional $1.5 million to complete galleries two through six. When we have secured these funds, then we will close those galleries for a four-month period of time, and then we open with a completed museum. It's all lined up; it's ready to go.”

The work has so far cost about $4 million. Those who have donated include Dominion, the Virginia Tobacco Indemnification & Community Revitalization Commission, the National Education Association, W.K. Kellogg Foundation, the Altria Group, the Institute of Museum & Library Services, the National Park Services “Save Our Treasures” program, the Cabell Foundation, the Mary Morton Parsons Foundation, the Virginia Department of Transportation “Enhancement Program,” Prince Edward County, and Wallace and Mary Gray Stettinius.

The original 1930s structure is being brought up to 21st century infrastructure standards. The central air conditioning and heating are new. Moton students never benefited from these systems.

“It was only because it was designated an Historic National Landmark and because Save America's Treasures said it should have a proper environmental system (that they got these improvements),” Ward noted.

And for the first time ever a full size water line is being installed. Ward explained that even when improvements to the Farmville water system were installed and delivered to surrounding businesses and structures, Moton School never got those upgrades.

“Right now, because we started fundraising to improve this facility, for the first time we are going to have access to the full water line that runs down Highway 15 that's been there for many years,” the museum's director explained.

“In many ways, not only are we building a museum and taking it forward,” Ward said, “but we are actually going back and correcting for 'separate but equal' and bringing it up to the standard it should have been brought up to when it housed students.”

And finding some history along the way.

A history now becoming more fully preserved and interpreted at the Moton Museum.

The Robert Russa Moton Museum describes its mission as being committed to the preservation and positive interpretation of the history of civil rights in education, specifically as it relates to Prince Edward County and the role its citizens played in America's struggle to move from a segregated to an integrated society.

(Among the upcoming events during April's 60th anniversary of the student strike are:

Johns-Griffin Day on Sunday, April 17, with an 11 a.m. morning worship at Triumph Baptist Church located at 2756 Darlington Heights Road, with a Johns wreath-laying immediately following the service. And a 2 p.m. Griffin wreath-laying at the Oddfellows Cemetery on South Main Street will be held prior to a 3 p.m. afternoon worship service at First Baptist Church, with dinner in the fellowship hall at 5 p.m.

On Friday, April 22 there will be a gala recognition at the museum of the plaintiffs in the historic Davis v. Prince Edward case which was joined to Brown v. Board, as well as recognition of major museum 2011 donors, for which tickets may be purchased.

The WGBH Boston documentary Freedom Riders will be shown on Saturday, April 30 at 2 p.m. at the museum.)

Editor's note: this article is based upon a press release from the Moton Museum, with additional research and writing by Herald editor Ken Woodley.