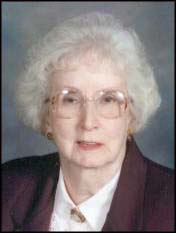 MARCH 3 – Julia (Julie) Jean Bransford Cox, 87, passed away on Tuesday, March 1, 2011 at her home in Farmville. She was born on June 6, 1923 in Hinton, WV, the second of two daughters born to Robert Earl Bransford and Florence Fredeking Bransford. In 1943, she met James (“Jimmie”) Robert Cox, of Hinton, WV, who became the love of her life.

On March 6, 1944, they were married in Burlington, VT, where he was in Officer Candidates' training at the University of Vermont. They had three children together.

Mrs. Cox was a member of the Farmville United Methodist Church and active in the Cumberland County Historical So-ciety and the Huguenot Society, Founders of the Manakin Colony of Virginia.

She was a loving wife and mother who devoted her life to caring for her family, home, and her Boston Terriers. She de-veloped an early interest in classical music and was very artistic, enjoying especially her needlework. She was a life-long learner and active genealogist.

Donations may be made to the Church Roof Memorial Fund, Farmville United Methodist Church or a charitable organi-zation of one's choosing.

The family will receive friends from 6 p.m. until 8 p.m., Saturday at the funeral home.