A Cut Above The Rest 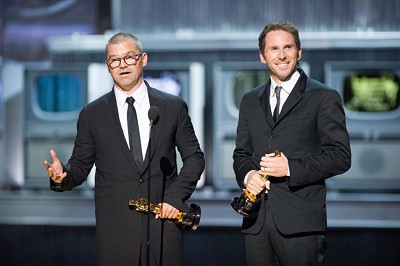 When Angus Wall went to the State Theater in Farmville to see Star Wars in 1977, he never imagined that he might one day be among the stars bringing magic to the big screen.

Last Sunday night he was.

Angus Wall and Kirk Baxter stood on the stage at the 83rd Annual Academy of Motion Picture Arts and Sciences Awards. Wall and Baxter were winners in the Film Editing category for the movie The Social Network.

“I would never in a million years think that I would win an Academy Award,” Wall said from his West Hollywood editorial house Rock Paper Scissors. “It's like the Beatles lyric, 'somebody spoke and I went into a dream.' That's what it felt like when I won.”

That dream began for Wall, son of the late Jackie and J. Barrye “Bo” Wall Jr., when he was growing up in Farmville.

“I'm very proud to be from Farmville,” Wall noted.

His sister Marcie Wall lives in Farmville, as do Bill Wall and Steve Wall, his uncle and cousin, respectively.

“We went to the movies all the time,” Wall recalled of his early years in Farmville. “Back then there was only one movie theater in town, the State Theater. It was always a treat – I remember seeing Star Wars there.”

Those early days of movie going made an impression on young Wall.

“It was really a pivotal moment for me, falling in love with films,” he added.

Two other films that same year added to the love affair.

“I remember my older brother Barrye taking me to see Apocalypse Now and The Deer Hunter,” he said. “I think they were both R-rated. My brother promised our mother he would get me out of there before the parts that were not for kids, but I think in both instances we stayed until the final credits. Those three movies are still some of my favorites.”

Wall believes that finding a career he “wanted to do 24 hours a day” was a learning process.

He started school in Prince Edward Academy and then transferred to the Campus School.

“My mother was teaching there, so it seemed to make sense,” he said.

In the sixth grade he transferred to Fork Union Military Academy.

“Then I went to Woodbury Forest for high school,” he added.

Wall chose Bowdain College in Maine because, once again, he fell in love.

“I'd done an Outward Bound course over the summer off the coast of Maine,” he related. “I really fell in love with the coastline. When I was a kid we used to go up to Moosehead Lake during the summer.”

At Bowdain, Wall was a Fine Art major with an emphasis in photography.

“I really love architecture, too,” he noted. “I did a summer project at Harvard in architecture.”

When Wall graduated and went to Los Angeles in 1988 he looked for jobs in both fields. When he accepted a job at Propaganda Films his life took another turn toward a career in film.

“I was the very low man on the totem pole,” he recalled. “I was dubbing video tapes and putting together people's show reels to try and get them jobs.”

Wall's first job in LA also brought David Fincher into his life. Wall has worked with Fincher, director for The Social Network, on a number of commercials and films since the 1980s.

“David gave me my first opportunity to cut a commercial in 1991 – it was a series of Nike commercials,” Wall noted. “I've basically been trying to work with him on anything he'd have me do ever since.”

In 1991, Wall and Linda Carlson started Rock Paper Scissors, “a respected West Hollywood creative editorial house known for its commercial work for such clients as BMW, HP, and Nike.”

In addition to film editor, Wall is a film title designer.

“I've enjoyed doing a lot of titles,” he said. “It's a very particular art form creating movie or TV show titles. I like coming up with the idea, the whole creative process. The first one I ever worked on was the main title for the movie Se7en in 1995.”

Film editing is just as creative, but in a behind-the-scenes way.

Wall referred to a quote by the famous film editor Walter Murch. “When you start not seeing yourself in the editing that's when you're getting someplace,” Murch said.

“Like any art form, when something starts to take on its own life you know it,” Wall added.

The first step of the film editing process, Wall explained, is the script.

“After you read the script you make notes to yourself or the director or producer,” he noted. “Then when you get the footage you react to that specific footage. In a way, editing is interacting with the characters. In order for me to do a good job and make sure I'm creating the best performance from the different actors, I have to care for those characters. It's like going to the movies all day.”

Every movie, Wall added, is different. The Social Network, for instance, is heavy on dialogue.

“In Social Network there are impossibly intelligent people who talk very fast,” he related. “The challenge with this movie was to stay ahead of the audience enough so everybody's very interested, but not stay so far ahead that people get lost.”

There were close to 300 scenes in Social Network, Wall noted, and all but two have dialogue.

Wall sees film editing as a tool for expression.

“You're taking all these fractured moments and you're trying to create this new reality with them,” he explained.

Screenings along the way provide some input, but often it isn't until the movie is near completion that those “fractured moments” all come together.

“In one of the last screenings before we blocked Social Network, Kirk and I realized that the movie was funnier than we thought it was,” Wall observed. “That didn't emerge until the end of the editing process. There's a delight in the level of detail that happens in David's movies. When we saw that we realized that the movie was really working – that humor just seemed to happen.”

Watching a movie as part of an audience adds another dimension to the editor's viewing experience.

“It's always interesting to sit in an audience,” Wall said. “You don't see the movie through your eyes, you see it through their eyes. You tend to see things you wouldn't see.”

Sitting in the audience of the 83rd Annual Academy of Motion Picture Arts and Sciences award presentation Sunday night, Wall admitted that he was nervous.

“The interesting thing is that when they called my name I got really calm,” he said.

Standing back stage after the awards Wall had a flashback to his early years in Farmville.

“Being back stage that night I was thinking about being a little kid and sitting in the living room watching the Academy Awards,” Wall concluded. “It felt like a different universe, but really it's not. Our mother was very instrumental in making sure we knew that if we had a dream it was absolutely achievable. I'm proof that if you go for something and you work hard you can do anything.”