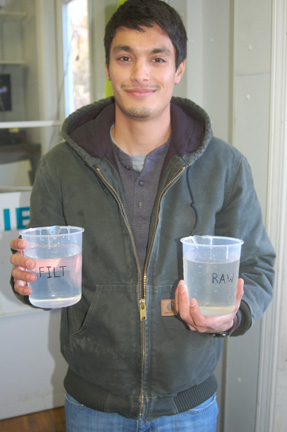 PRINCE EDWARD – A maximum guaranteed price for a water service system will have to wait a little longer.

County supervisors, following the recommendation of County Administrator Wade Bartlett, approved a contract extension with Crowder Construction Company to the end of February.

Bartlett advised at the December 14 meeting that “it would be better to have a better estimate than a poor estimate.”

Crowder Construction – with Draper Aden engineers – has worked on specifics outlined in an interim agreement with Prince Edward on plans for a public water system tapping into the Sandy River Reservoir.

The County was presented an unsolicited proposal – under the PPEA, or Public Private Education Facilities and Infrastructure Act of 2002, localities may receive unsolicited proposals from private firms – and late last year supervisors approved an interim agreement with Crowder Construction Company to take a deeper look into the specifics of a water project.

“The December 15 date that Crowder and Draper Aden had submitted was a self-imposed deadline,” Bartlett told the board. “There is not a firm date in our interim agreement of the time that they would have to get back. It's based on the notice to proceed and certain time frames…from that.”

He factored a January 19 date in the interim agreement.

The extension would provide time to review results of a field run pilot treatability study on the Reservoir. (The study essentially set up a small water treatment process at the Reservoir.)

“We anticipate receipt of all sampling results by December 21…at which time we can analyze the data and move toward completion of the study,” wrote Johan McIntyre of Crowder Construction in a December 6 letter to the County Administrator. “The results of this study will be submitted to the VDH (Virginia Department of Health), along with a complete response to their previous comments on the PER (preliminary engineering report), by January 5, 2011.”

The Health Department had looked to a possible second pilot study at a different time of year, but Jeff Kapanos of Draper Aden offered that the winter is the “worst case” and expressed confidence when the results come back that they would request a second pilot study not be necessary.

“The Health Department's agreed to look at our information with us. They haven't agreed to that yet until we submit,” Kapanos said.

Bartlett explained, “Basically, the position is, the Health Department was wondering if algae would be a problem. We've never really seen that out there, and that was, I think, the reason for the thinking of doing another pilot study in the summer, but the problem then if you didn't have algae then, would you want to…wait another year. So that's the position that you can design that just like all other plants have been designed to handle the algae if there is a problem with algae. There's been no indication that there will be.”

Asked if it were simple to treat algae, Kapanos said it “depends on the type of algae and everything and magnitude and it is a problem at other reservoirs at times of the year. There's different ways to deal with it.”

They could spend money for another pilot study in August, he said, but they may or may not have it and that doesn't mean they won't in the future.

The best approach, Kapanos cited, is to have many mechanisms built in. If algae develops, there are a lot of different ways to tackle it, he said.

In Other Water News…

Supervisors agreed to approve the county administrator's draft agreement to be submitted to the Department of Conservation and Recreation. The agreement outlines provisions by which the County could use the High Bridge Trail State Park corridor to construct a water line if necessary.

FARMVILLE – Shopping locally is not only about convenience for Tracy Johnson. “It's about loyalty to the small businesses in... read more