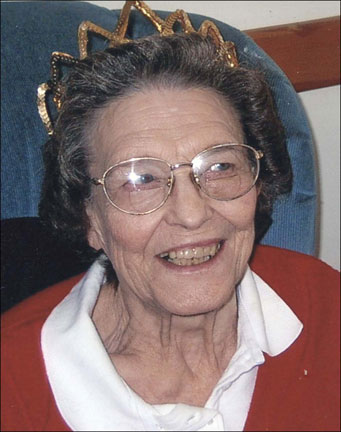 DECEMBER 30 – Eleanor Blackwell Walton, of Farmville, was granted her angel wings on Wednesday, December 29, 2010. She was born on July 10, 1922 in Appomattox, the daughter of the late Everett Wilson Blackwell and Nannie Victoria Smith Blackwell.

She was married to the late William (Bill) Walton, the love of her life, and was a devoted and caring mother who loved being surrounded by her family and friends.

Her family fittingly referred to her as “The Queen.” She was a member of Heritage Baptist Church and served as a senior regent for the Farmville Moose Lodge. Her hobbies included embroidery, planting flowers, and working word puzzles.

Nothing made her happier than to have her family filling her home.

The family will receive friends from 12:30-2 p.m. on Saturday, January 1, at Puckett Funeral Home, with funeral services to follow at 2:30 p.m. in the chapel. Interment will be at Trinity Memorial Gardens, Rice.

Memorial contributions may be made to the Farmville Rescue Squad.