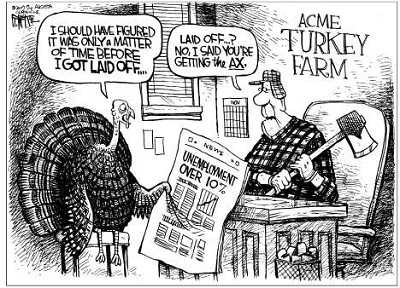 When Thanksgiving Was Lost And Found Inside The Woods

Deep inside the woods can seem very far from the turkey-laden tables of Thanksgiving.

In fact, it is far distant, unless your Thanksgiving table is set within a cabin deep inside the woods.

But there are few places better for giving thanks at this time of year, when the days wind down more quickly into darkness as Christmas approaches.

The woods can have a cloistral feel, for some. One feels secluded, though not alone, and pleasantly separate from the ways and the daze of the world and its constant hive-like hum of non-stop so-called existence via the internet, email, texting, tweeting, and cell phones that can suffocate and form a kind of wireless prison for the soul.

Why do you think they are called “cell” phones?

Try escaping. Obviously you can, but can you bring yourself to want to?

The wires of our psychic dependency on keeping connected to everyone and everything are there, though they are not the razor wire more commonly associated with confinement.

Such a difference it is to walk down through the pews inside nature's never locked cathedral where one can feel glimpses of the holy within and without us-our true wireless connection.

Especially as the sun, even through faded autumn leaves, gives its own stained glass effect to the light, filtering it, especially in late afternoon when the colors deepen toward dusk, in ways that nurture meditation and cultivate snatches of spontaneous unspoken prayer and deeper insight into the life we share.

A stream whispers, talking in tongues that are indecipherable but understood nevertheless. Inarticulate speech of the spirit. Brilliantly articulate beyond words.

The water swirls around the bank-hugging roots of trees, splashing over stones. No wonder the otters have slid down a section of bank so often it seems children have been playing here after school, the mud smoothed to perfection, as good as any water park.

The flowing stream sends a flashing S.O.S. of sunlight as a breeze moves branches, bushes and river grass back and forth between the water's surface and the sun.

The great miracle of the water now is the reflection. Even someone walking with head bent, shoulders stooping under a heavy weight, sees the unavoidable sky and its light.

And there beside the sky, near the stream, is a leaf of faded, weathered brown, a leaf that has felt the rough and tumble of the world and the season of summer disappear from within it and no return to the tree that was its hold on the world. Its connection.

You pick it up and there, at its center, like a heart still beating, is a flash of deepest red.

Years from now, it will still be there.

For that, and for so much else, you give thanksgiving and return to the table filled.

Editor, The Herald: Upon reading the Town of Farmville's proposal on water and sewer rate increases I have to keep... read more