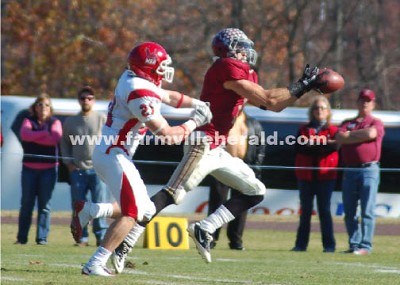 HAMPDEN-SYDNEY – Funny how history has a way of repeating itself.

Forty years ago in their only prior meeting, Hampden-Sydney's football team was unable to defeat Montclair State in a postseason game that came down to a failed two-point conversion.

Saturday afternoon, in the first round of the NCAA Division III Playoffs, the Tigers were again thwarted by a failed two-point conversion attempt that left them on the short end of a 16-14 loss to the Red Hawks.

It was just one play in a number of unfulfilled scoring chances for the Tigers, but fitting given the brief history shared between the two programs.

The Tigers fell behind the Red Hawks 10-0 at the half and 16-0 in the fourth quarter, before starting a furious rally that pulled the H-SC back into the game.

Having to overcome a short missed field goal opportunity in the first half, and a turnover on the one-inch line in the third quarter, H-SC didn't seem to panic, despite being down by two full scores.

“When you have first and goal and don't score, and then miss a chippie field goal and then a fumble on the one yard line,” said H-SC head coach Marty Favret, “we felt lucky to be down only ten points at the half.”

“Coach [Favret] stresses that we don't lose at home,” said H-SC junior wide receiver Sean Cavanagh. “We don't expect to lose. Ever. No one gets worried on the sidelines.”

After struggling against what Favret said was the best defense the Tigers have played in a number of years, the Tigers began to move the ball in the fourth quarter.

Quarterback Travis Lane began to heat up to move H-SC into scoring position, and tailback Evan Lane punched in a short run to get the Tigers on the board with 13:36 left. Lane hit Andrew Bruckner in the end zone for the two point conversion to cut MSU's lead in half.

After a defensive stand, the Tigers quickly moved the ball down the field, and pulled to within two points at 16-14 when Lane and Bruckner again hooked up – this time for a nine-yard touchdown.

Lane's two-point conversion pass was unsuccessful, however, leaving the Tigers with work still to be done.

“We had the match-up we wanted,” said Favret of the failed two-point conversion. “It was there, but we held onto the ball for a little too long.”

The H-SC (9-2) defense again came up with a stop to give the Tigers the ball with 3:48 remaining, but Montclair State cornerback Gary Knoeppel picked off Lane's pass at midfield.

“That interception by [Knoeppel],” remarked Favret, “it was just a circus catch.”

The Red Hawks took possession at midfield, and were able to run the clock out on the runs of tailback Matt Jiminez.

“I think we maybe got a little too conservative in the second half,” said Montclair State head coach Rick Giancola. “We were just trying to hold onto the ball. They can score from anywhere…They're as good as anybody we've played offensively – including Mount Union.”

Lane was 30-49 for 314 yards, one touchdown and an interception. Cavanagh led all receivers with nine receptions and 160 yards, while King had 62 yards receiving on eight catches and Kyle Vane caught five passes for 58 yards. H-SC only rushed 15 times for 37 yards combined.

Montclair State (10-1) was led by Miminez for a game-high 113 yards on 29 carries and a touchdown, while Dan Keegan had six receptions for 149 yards, including an 81-yard touchdown reception in the third quarter.

Montclair State will move on to the second round of the playoffs, and will play at Wesley on Saturday at noon.

Knights On The Playoff Road Again

Buckingham has compiled a 19-1 record over its last two regular-season campaigns. Despite that, the Knights have been forced to... read more