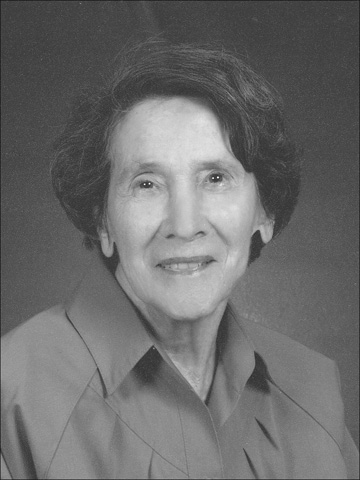 OCTOBER 12 – Grace Butler Waring Putney, 91, passed away at her home in Farmville on Monday, October 11, 2010. She was the widow of Samuel Waverly Putney Jr. and the daughter of the late Lucie Butler and Dabney Taliaferro Waring.

She worked many years with her husband in the family business in Farmville and was actively involved in many civic and cultural organizations. She was a member of the Judith Randolph-Longwood Chapter of the D.A.R., the Farmville Woman's Club and the Nora Lancaster Garden Club. She sang with and was a benefactor to the Commonwealth Chorale. Mrs. Putney was honored by the Central Virginia Arts Council for her service. She was a member of the Class of 1940 at Farmville State Teachers College (Longwood University) and actively supported the school.

She is also survived by her four children, their spouses, and nine grandchildren: daughter, Grace Lee and Dr. Berkeley Pemberton of Staunton and their children, Rosalie Vaughan Fessier and husband, Michael, and Dr. Mary Lee McDavid and husband, Fred; son, Samuel W. Putney III and wife, Barbara of Roanoke and their son, Russell Waverly and wife, Christina; daughter, Lucie Meriwether and Joseph Zehner of Farmville and their children, Dr. Robert Waverly Zehner and wife, Kristine, Anne Meriwether Zehner and Michael Dabney Zehner; and son, William Waring Putney and wife, Linda of Farmville and their daughters, Katherine Waring Wright and husband, Daniel, and Ellen Elizabeth and Linda Carol Put-ney; a sister and two brothers, Lucie Hughes and husband, Andrew of Orange City, FL and Dabney T. Waring Jr. and wife, Jennifer of Charlottesville and William Lowry Waring and wife, Marilyn of Zephyrhills, FL. She also rejoiced in the birth of each of her seven great-grandchildren.

The family would like to thank the staff at Brookview Lodge as well as her personal caregivers for their compassionate care.

The family will receive friends at the Puckett Funeral Home Wednesday evening from 7 to 9 p.m. Interment will be at 9:30 a.m. Thursday at Westview Cemetery, followed by a memorial service at 10:30 a.m. at College Church.

The family requests that memorials can be made to the following: The National D-Day Memorial Foundation in Bedford, the S. Waverly and Annie V. Putney Scholarship at Longwood University, the Commonwealth Chorale in Farmville or Col-lege Presbyterian Church.