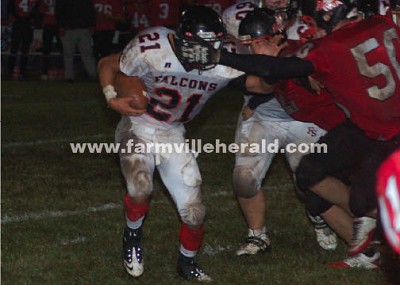 ISLE OF WIGHT C.H. – Three previous times since the 2002 season had the Fuqua School football team entered its game against Isle of Wight Academy undefeated, only to come away with a season-changing loss.

That all changed last Friday. The Falcons, again undefeated, were not slowed by muddy field conditions caused by 14 inches of rain on the IWA field, and raced to their first win over the Chargers in eight years with a convincing 38-14 victory.

Junior quarterback Charles Williams was the difference, as he has been all season. Williams rushed for 302 yards on just 19 carries and scored three times to help the Falcons post a long-awaited win over the program that can claim to be the team of the decade in the small school division of the VISFA.

“I think for the first quarter, we were kind of feeling our way along, because of the field conditions,” said FS head coach Skeeter Fore. “But once we got comfortable, we were able to use our speed to our advantage. In those conditions, you've got to be careful, and keep hold of the ball. We didn't have any turnovers to their two, and that was as key as anything.”

Fuqua jumped out to an 18-0 lead, but after getting turned away on its first three two-point conversion attempts, the Chargers got on the board with a long drive late in the second quarter to pull to within 11 points at the half at 18-7.

Fuqua answered on its first drive of the third quarter with a score by rather unconventional means. Williams, junior tailback Larry Haskins and senior back Michael Marquez moved Fuqua to the IWA 11-yard-line, before consecutive holding penalties pushed the Falcons back to the 38-yard line. Haskins rushed up the middle for 14-yards to set up a third-and-17 from the IWA 18-yard line. Williams then called his own number and rushed for the 18-yard touchdown, with moves that caused several IWA defenders to slip in attempt to make a play. Carter Cunningham hit Levon Harper on the two-point conversion to push Fuqua's lead to 25-7.

“That was a crucial drive for us,” said Fore, who pointed out that IWA scored on its next possession. If we don't score right there, and turn the ball over on downs, assuming they score, it's all of the sudden an 18-14 ballgame. I think what really helped us was our ability to convert on our third down plays. We were able to do it consistently, while our defense did a real good job of holding them on third down. The defense also didn't allow them to really get any big plays. Everything they got, they had to work for it.”

Isle of Wight may have needed to work for everything it got, offensively, but Fuqua used two big plays on its next drive. Williams rushed up the middle for a 45-yard gain, and then scored a few plays later after dropping a shotgun snap. He picked up the ball and raced 25-yards to the endzone to give Fuqua a comfortable 32-14 lead.

“He's done that six or seven times this year,” said Fore of Williams' ability to make something big out of a broken play. “That may change over our next couple of games, but when a play breaks down, you really want to see what he can do.”

In addition to Williams' numbers, Haskins was almost equally impressive. He rushed 14 times for 125 yards and three touchdowns of 56 yards, nine and one, while Marquez rushed three times for 39 yards.

Fuqua will have a bye week to prepare for its biggest game of the season on October 15, when the Falcons host defending state champ Blessed Sacrament-Huguenot for homecoming. The winner of the game will have a leg-up on the battle for the VCC crown.

“We're in a rhythm right now, and we almost don't want to take a break,” said Fore. “But it will be nice to have the bye so we can heal some bumps and bruises and prepare for the next month of games. This will be a crucial stretch. Even though the playoffs expanded with a fourth division, it's beginning to look like there will again be some good teams left out. We haven't assured ourselves of anything yet, and how we approach this open week will have a bearing on what we're able to do over the last month of the season.”