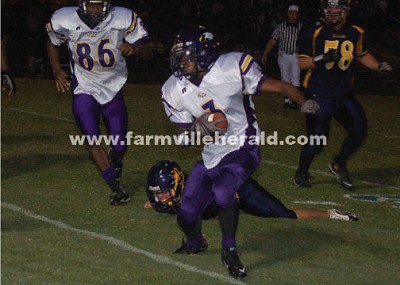 SKIPWITH – No team values a victory more than one that hasn't won. Prince Edward and Bluestone shared that sentiment heading into Friday night's contest at Bluestone.

Though the game may have lacked a certain polish, the two teams played with the urgency usually only found in the playoffs, with Prince Edward prevailing 29-14.

“It felt good,” said PECHS head coach Terrence Edmonds. It was big for us and your young guys to get a win. Now they know what it takes, and hopefully that momentum will carry over to this week.”

It was easy to tell that Bluestone had focused on the contest in hopes of ending their 33-game losing streak. Three plays into the contest, the Barons went up 6-0 on a 59-yard touchdown bomb from the arm of quarterback L.J. Barnette.

“That showed that we still have some things to shore up on our defense – especially in pass coverage. We've got to maintain our intensity from week to week, and keep replicating the effort we showed in our game against Park View.”

Using an up-the-middle ground attack, Prince Edward (1-5, 1-2 Southside) wasted little time in getting into scoring position on its first two possessions, but turned the ball over on downs and on a fumble inside the Bluestone ten-yard-line.

The Eagles finally got on the board on a Raheem Nash three-yard touchdown run midway through the second quarter to take a 7-6 lead.

“We didn't panic, and stayed with our plan to run the ball with our big guys, and then switch it up and hit them with our faster guys.”

Bluestone (0-5, 0-2) wasted little time in getting the lead back. Barnette broke through for a 55-yard touchdown run on the Barons' ensuing drive to take a 14-7 advantage.

Prince Edward took the lead for good with 1:36 remaining in the half on Jeremy Walker's only completed pass of the night. His 12-yard toss to Raheem Smith on third-and-goal, along with a two-point conversion by Ralick Lockett, gave PE a 15-7 lead just before the half.

Bluestone moved back down the field to attempt a late-field goal, but the attempt went wide-left, giving the Eagles their first halftime lead of the season.

The two teams traded possession in the third quarter, before Nash put the Eagles ahead 21-14 on an eight-yard run at the beginning of the fourth quarter. John Robinson put the game out of reach with a 17-yard touchdown run with 4:18 remaining, and former Bluestone player Michael Lawrence closed the door on any hopes of a comeback by his former team with an interception on the PE eight-yard-line with under two minutes to play.

Prince Edward rushes for 434 yards on 67 carries as a team. Lockett led the Eagles with 125 yards on 18 carries, while Nash gained 123 yards and rushed for two touchdowns on 16 touches. The Eagles used bruising backs Tyrek Goode and Isaiah Davis to soften the Bluestone defense. Davis rushed eight times for 56 yards, while Goode had 48 yards on ten carries. Robertson had 48 yards and a touchdown on six carries.

“Goode and Davis are two bruising guys. They had success wearing them down.

“We're going to be working on in preparation for next year, but we've got to teach them the proper technique on how to be running backs. Hopefully, in the future, having two big running backs continually banging on our opponents will wear them down, much like they did in this game.”

Walker completed one pass on six attempts for the 12-yard score to Smith. The Eagles committed two turnovers on the night, while forcing two. Defensively, Noah Bowman led the Eagles with six tackles, while Smith and Rashaad Walton had five apiece.

Prince Edward will host Nottoway on Friday night for homecoming at 7:30 p.m.

“The kids are excited for homecoming. For most of them, it's their first homecoming as a varsity football player. Hopefully the win, and this week's festivities will work for us in a positive way.”

The Cumberland High School football team was able to get some semblance of a running game going in its homecoming... read more