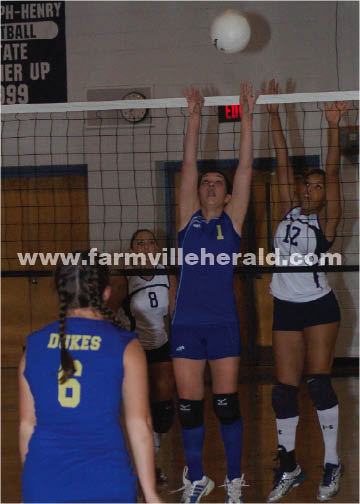 “I knew we would be a little tired,” said CHS head coach Heather Storrie. “We gave everything we had [Tuesday] night against Buckingham, but I was proud of the way we played. We went up against the top team in the district, and after the first set, we competed and were rewarded with a win in the third set.”

Randolph-Henry had little trouble with Cumberland in the first set, as all but one of Cumberland's points came off of R-H errors with the exception of an ace by junior Jennifer Martin.

The second game, however, was a different story. Cumberland took advantage of more R-H errors, but also started to put together some runs. A kill by Rachel Jackson gave the Lady Dukes a 7-5 lead, and CHS managed to keep pace midway through the set, trailing 17-15, before Randolph-Henry rattled off eight-consecutive points to win 25-15.

Playing mainly against Randolph-Henry's starters in the third set, Cumberland grabbed the momentum early-on. A kill by Heather Fowler, followed by a Mackenzie Parker ace, gave the Lady Dukes an early lead. Randolph-Henry used a 4-0 run to take a 17-12 lead, but Cumberland battled back with a run of its own to pull to within a point at 17-16, and then scored four more to take the lead for good at 20-18. Nursing a 21-20 lead, Cumberland closed out the set with a 4-1 run to get the victory.

“I was happy with the way we didn't give in after Randolph-Henry scored those eight points to win the second set,” said Storrie. “That's one of those points where it's easy to give up, but to their credit, they stuck with it, and forced the fourth set.”

A re-focused Randolph-Henry team took immediate control of the match in the fourth set. The Lady Statesmen jumped out to a 15-2 lead, and cruised in for the victory.

Storrie acknowledged her team's continued improvement, noting that it's hard to make up ground during the season as other teams are improving at almost the same rate.

“Overall, our biggest improvement is how we cover the court and how we work for every ball. We're communicating better, and are starting to better understand the wheres and whys of where we need to be in certain situations. We still really need to concentrate on our first pass. Especially when we're receiving serves. That's something that continues to be a focus, and hopefully, we'll be better by the time the tournament starts.”

Cumberland will travel to Amelia on Wednesday, October 20, and will host Lunenburg on Monday, October 25, before wrapping up the regular-season on October 26 at home against Buckingham.

“I think we've improved at all three levels – middle school, junior varsity and varsity – and we've done it every time we've taken the court. It hasn't been easy for them, but it's certainly exciting to see.”

SKIPWITH – No team values a victory more than one that hasn't won. Prince Edward and Bluestone shared that sentiment... read more