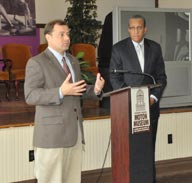 FARMVILLE – The Moton Museum has won a grant to begin a region-wide discussion that could take education in rural Southside Virginia into uncharted waters-charter schools.

Public charter schools that would be part of a public school system.

Can they work in a rural setting and, if so, how? Those are the questions.

Fifth District Congressman Tom Perriello joined museum director Lacy Ward in Farmville on Tuesday afternoon to make the announcement that the museum will take the lead in a dialogue searching for answers.

“We're excited about the opportunity,” Ward told The Herald on Wednesday, “to lead this discussion.”

The Moton Museum is eligible for $159,103 per year for the next three years from the U.S. Department of Education's Public Charter Schools Program.

This year's grant has been won, with the following two years contingent on progress.

The museum will not establish or operate a charter school but its mission is to begin a community discussion in the region “on the formation of a charter school that would give Southside Virginia parents and students more educational options while meeting the unique challenges of rural school systems,” stated a release from Rep. Perriello's office.

As Ward said of the museum's role, “We're providing the incubator.”

According to the congressman's office, the project will help “create a model for recruitment, development and retention of teachers, as well as a structure to promote excellence in curriculum development, school structure and operations, fiscal management and governance. The ultimate goal will be to create a model for charter school development in rural areas.”

Ward sees the Moton Museum as the perfectly fitting catalyst to such a regional conversation that will encompass all of Southside Virginia. The building is a museum because black students at then-Robert Russa Moton High School went on strike on April 23, 1951 against separate and unequal facilities for African-Americans, their families subsequently mounting a legal challenge against segregated schools in the U.S. that became part of the Supreme Court's historic Brown decision three years later.

Ward told The Herald on Wednesday that the museum's leadership in the charter discussion “is very much in keeping” with its history and mission.

Charter schools, for example, have previously been centered on helping schools in urban America.

Leading the discussion on how charter schools can help elevate achievement within a rural public school system, Ward believes, is being “true to the history…and being true to the pioneers” who began shaping history at R. R. Moton High School on that day nearly 60 years ago.

True to that history and those heroes because it keeps faith with a commitment to “always be at forefront to expand educational opportunities and improve educational outcomes,” Ward said.

The statement from Rep. Perriello's office explained that charter schools in Virginia “are public schools that provide high-quality educational options for parents and students, while giving communities and educators flexibility to create alternative and innovative curriculums.”

Applications for the formation of a charter school, Rep. Perriello's office notes, “must be approved by local school boards and are subject to a rigorous review process. Local school systems retain control over the schools once opened.”

Rep. Perriello noted that “investments in education pay dividends for the competitive advantage of our communities and the quality of our workforce.”

The congressman added, “It's great to see a community exploring even more ways to ensure every child gets a world-class education that will prepare them for the jobs of tomorrow.”

An entire region, in fact, exploring the possible ways in which charter schools operated by public school systems in rural Virginia can expand and elevate academic achievement and what that means in the life of the individual and their community.

Ward explains that the Moton Museum's place as the anchor for the multi-jurisdiction Civil Rights In Education Heritage Trail has created regional relationships that can effectively be brought to bear on the subject of charter schools in Southside Virginia.

“We are uniquely placed,” Ward said of the Moton Museum, to “operate across county boundaries but on a central theme.”

And providing services to the community is part of the museum's vision statement.

The Moton Museum saw a chance to marry the educational history celebrated at the museum with “contemporary policy discussions” on education, Ward explained.

Attention was paid to policy changes in education and the General Assembly's legislation regarding charter schools and virtual schools.

There was sense of a coming “sea change that may affect the way education is delivered in rural Southside Virginia,” Ward said, and the museum wanted to be ahead of that curve.

Sensing that “the nimbleness of a non-profit” might be effective, Ward said, “we became in engaged…We decided that, given our history, we should be actively participating.”

A big help was the U.S. Department of Education's obvious desire to bring such non-state affiliated, community-based non-profits to the fore to see if they could engage communities in the conversation about what potential there might be for charter education in rural America.

Spurred by the inclination of President Barack Obama, the grant opportunity came looking for agencies outside the traditional scope, instead of to the states, themselves, or their departments of education.

“So the museum's role,” Ward emphasized, “is to begin the conversation, to identify groups and say 'What is charter education and what can it be in Virginia and, finally, how might it be implemented in the rural environment?

“…We need to figure out if it can be a viable alternative in the rural setting.”