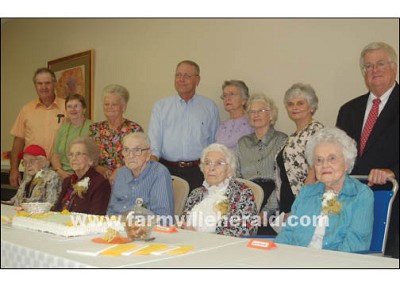 The Woodland in Farmville celebrated National Centenarians Day September 22 with a gathering of residents, family, and friends in the activity room. During the program, seven featured guests, all centenarians, shared over 700 years of life experiences.

“This is the first time we've had this many centenarians,” stated Beverly Currin, of The Woodland staff.

The room was festively decorated, and a large sheet cake was centered on the table in front of the five centenarians who were able to attend.

The first to be honored, Effie Anderson waved to those who came to share in the festivities. She was sporting a baseball cap in her favorite red color.

“She lived on a tobacco farm in North Carolina,” stated her niece Geraldine Sanderson. “She was one of seven who lived to be over 90 years of age.”

Sanderson recalled that her aunt, who had no children, always had a big garden.

“She loved raising vegetables and flowers,” she noted. “And she also liked to build things – she was always hammering on something.”

Mary Atkins, who turned 100 in July, had been recuperating at the Moore Center from a fall and is quick to note that she did not break any bones.

Mrs. Atkins and her husband, who died about 15 years ago, were married for 65 years.

“We went over a lot of rough roads and a lot of bumps, but we had a good life,” she said.

In 1910 the life expectancy for men was 48.4 years, and the average yearly salary was $750. A 12-day cruise (for those who could afford it) cost $60. Favorite toys included the erector set, Lincoln logs, and tinker toys.

Construction was more than a childhood activity for Barksdale. According to his son Lee, the elder Barksdale spent all his working years involved in the building trade.

“He traveled all over the east coast working on major construction projects,” he stated. “He helped build the dry docks in Newport News.”

The younger Barksdale described his father as adaptive.

“He was a trustee of his church in Drakes Branch,” he added. “He was a hard-working Christian man.”

Minnie Elliott was born during the last year of the previous decade on January 31, 1909.

One of her earliest memories was riding to church in a horse-drawn wagon.

In 1909 there were 8,000 cars to every ten miles of paved road, and the population of 76,000,000 Americans lived in 46 states. It was an age of industrial expansion when the Sears and Montgomery Ward catalogs were read more than any other book except the Bible. The Teddy Bear, patterned after a cartoon of Teddy Roosevelt, also went into mass production that year.

Mrs. Elliott had her own personal method of mass production.

“She was a wonderful seamstress and made all of our clothes,” stated one of her four daughters. “She made my whole wardrobe when I went to Longwood College. One day, someone stole my clothes out of my car. Mother stayed up at night and sewed, and in a few weeks I had another wardrobe.”

“My mother always had a can-do attitude,” her daughter added.

Louise Boswell, the oldest in attendance, was born in 1908.

It was the year the Model T was introduced, and Mother's Day was celebrated for the first time.

“My mother never complained, and she never had an evil word about anyone,” stated her son Jack Boswell.

Mrs. Boswell was a teacher for 23 years.

“She got off the bus at the school, and the principal asked her if she had her lesson plans ready,” Boswell related. “My mother said – 'yes, ma'am.' Later she admitted that she had no idea was a lesson plan was.”

“I traveled to all the continents except South America,” she stated. “I don't know how I missed South America!”

In the year Madge Haga was born the first wireless message was sent, changing the world of communication.

Madge Haga was a communicator in her own right – she penned numerous poems during her life.

“Just a few years ago she had a book of her poetry published,” stated Nancy Haga.

“She married a minister and at one time had 700 chinchillas in the basement of the parsonage,” her daughter-in-law said. “She also developed the first white chinchilla.”

“She's had a charmed life,” she said of Mrs. Haga.

A native of Keysville, she was an avid golfer for many years.

“She was very athletic all her life,” stated Beverly Currin of The Woodland.

Mrs. Hall worked as a teller at a bank in Keysville and worked with her husband at a pharmacy in Amelia. After her husband's death she moved to Virginia Beach.

“She was also a wonderful bridge player,” Currin stated of the centenarian who has been at The Woodland for the past seven years.

Currin believes the secret to longevity for this group lies in a strong work ethic and faith.

Looking back over a lifetime spanning 101 years, Minnie Elliott commented, “I thank God I can get up each morning and enjoy the day.”

National Centenarian Day is, without doubt, a day to enjoy.