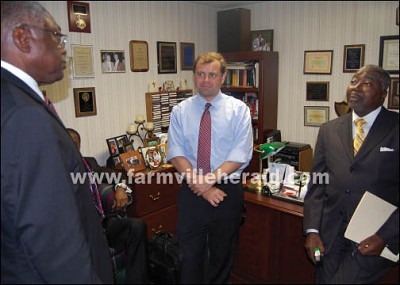 Without Stimulus, US 'Would Have Gone Into A Depression'

FARMVILLE – The third highest-ranking Democrat in the House of Representatives, James E. Clyburn, came to Farmville Sunday on behalf of a freshman Democrat in the Fifth District of Virginia.

Clyburn, of South Carolina and the highest-ranking member of congress to come to Farmville in memory, told church members at Spirit Of Life Church Of God In Christ that Rep. Tom Perriello “very much believes faith without works is dead. So I am here today to try to do what I can to help him get reelected.”

“I am here because I think it's very important for Tom to be reelected. I have watched him…knowing full well that if he votes for this he's going to be castigated. But he said it's the right thing to do,” Rep. Clyburn said of Rep. Perriello's vote for health care reform and the federal stimulus package.

When asked about Republican criticism that the stimulus package hasn't met expectations, versus the condition the economy would be in if the stimulus legislation had been defeated, Rep. Clyburn cited Mark Zandi, who advised Sen. John McCain during the Republican's bid for the White House in 2008.

“I would not argue with Mark Zandi. Mark Zandi was John McCain's economist. He was his economic advisor during his presidential campaign. He said had we not done what we did we'd have reached 16 percent unemployment in this country and we would have gone into a depression. That's what Mark Zandi said,” said Rep. Clyburn, whose presence in Farmville clearly indicates the national implications of the Fifth District election, which is in the bull's-eye of both parties' national committees.

“And I've not seen any economist that disagreed with that,” he said, standing in the office of the church's pastor, Novey Wiley. “Now you've got a lot of talking heads on television, who've never had an economic course in their lives, and they would say things to the contrary. But these are bona fide economists saying we did the right thing.”

“So when you got these people saying that,” Rep. Clyburn continued, noting a 3.4 percent increase in gross domestic product, “then you've got to ask yourself the question-who do you listen to when you start talking about the economy?”

Rep. Clyburn and Rep. Perriello met Sunday with the church's congregation during a cook-out. The two congressman had earlier worshipped at Sharon Baptist Church.

Speaking of his House Majority Whip, Rep. Perriello noted the importance of faith, for both men, in their decision-making.

Rep. Perriello told the gathering at Spirit Of Life Church Of God In Christ, “What I think we need more of in our politics is moral courage.”

Citing Rep. Clyburn as an example, he noted the Majority Whip's style in congress: “his history in the civil rights movement, his continuing history of justice for all Americans of all colors gives him that authority to sit down, not by some threat, but simply by reminding people what's in their heart and what's in their soul.

“When we not just win as Democrats but, more importantly, when we win as Americans is when we have that politics of moral courage that says we going to do the things based on-not a 24-hour news cycle but on an inner calling of what makes us stronger as a country.

“So it is a tremendous honor to have Mr. Clyburn here,” Rep. Perriello said. “We're very excited to bring him to Farmville and for me to get to serve with him is truly one of the great honors.”

One of the key issues in the campaign is health care reform, with Republicans talking about repealing some or all of the legislation, and even some Democrats are running for cover from criticism of their votes as the election nears.

Neither Rep. Clyburn nor Rep. Perriello are among those running for cover.

“People had the same criticism of social security,” Rep. Clyburn said. “That it was socialism, that it was all kinds of stuff.”

Now people look back, he pointed out, “and say that's one of the best things we ever did.”

People will wonder why it took us so long…So that was a tough vote for him (Rep. Perriello) to take but he took it because he thought it was the right thing to do.”

The House Majority Whip is optimistic as he looks ahead to November 2, Election Day, and believes Americans are now beginning to focus on the candidates and will like what they see in Rep. Perriello.

“They'll be drawing some contrasts between these candidates and when people see what Tom Perriello stands for and see what his opponent is calling for,” Rep. Clyburn said, “I think you're going to see a big bubbling up of support for him throughout this community…We are going to prevail because I don't know that many people want to go back to where we've been. There are always forces that want to go back. There are always people who feel that 'health care is bad for everybody else, but okay for me.'”

Rep. Clyburn said, “I don't know of a single person today who would tell you that social security is a bad thing but when social security was first passed everybody said it was so bad, a lot of people lost their elections over it. Now we look back on it and say it was one of the best things this country ever did. And I think the same thing's going to happen with health care. People are going to look back on this and they're going to say there is something wrong with saying to a child born with diabetes 'You can never have health care insurance.' There is something wrong with saying to a woman with breast cancer that 'Your insurance company can drop you if they want to' and that's what they've been doing. Or a man with prostate cancer.

“These kinds of things we have gotten rid of and I believe, in the final analysis, people are going to be very supportive of that. And so if you've got a candidate that stood up and voted for health care and a candidate who says if I get a chance I'm going to vote to repeal it then the choice ought to be simple for you,” Rep. Clyburn said, adding, “All I hear from my Republican friends is that we want to repeal (health care reform), we want to rescind…”

Rep. Perriello told the gathering on a hot, sunny Sunday that there is still work to be done in congress and asked for the chance to continue that work. “We really want more time to keep rebuilding the strength of this country, building on its past, and I feel like I'm standing beside someone,” Rep. Perriello said, “who's been on the right side of history and who is on the right side of the future.”