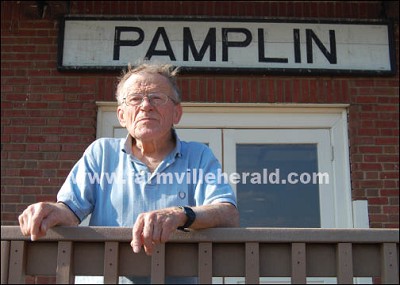 FARMVILLE – The Director of Virginia's State Parks system had no trouble recalling the look on Pamplin Mayor Bob Mitchell's face at the conclusion of last Tuesday's meeting with officials from the state's Department of Conservation and Recreation and Norfolk Southern Railroad.

“I left him grinning from ear to ear,” Joe Elton said during a Friday phone interview. “And he said, 'If I look happy, it's because I am.'”

Happy? He was on cloud nine.

Mitchell's feet still seemed a few inches off the ground late Friday afternoon when he traced his finger along a map, showing a reporter how High Bridge Trail State Park would come all the way to the Pamplin Depot, instead of ending about a mile out of town as it does now.

There is a proposed agreement to do just that, agreed to verbally during that Tuesday meeting, and nobody sees a roadblock to the words being signed in writing once the paperwork is complete.

“We hammered out an agreement in principle,” Mayor Mitchell said, regarding a deal he had been advocating “for at least three years…

“It has the potential for being a real economic stimulus for the Town of Pamplin, very much so,” the mayor said Friday.

He has visions for his community and never surrendered the dream of seeing the state park bring its final mile into Pamplin as originally conceived.

“No one can guarantee a renaissance will follow this,” Mitchell said, “but we can certainly increase our chances.”

Once the additional mile is constructed, trail traffic into the town will increase when people learn Pamplin is a destination and one with outside access to flushing toilets in the depot.

What Mayor Mitchell would really like to see, and what he believes is entirely possible, is revitalization for the town.

“We think there will probably be more store activity here that will follow when they get wind of this,” he said.

Businesses catering to the tens of thousands of hikers and cyclists expected to use High Bridge Trail State Park each year once it is open from Pamplin, through Farmville and across High Bridge, itself, and on toward Burkeville-where a final mile or so also needs to be negotiated.

Elton, who has publicly predicted the trail will one day attract close to one million people annually, has no trouble seeing Mayor Mitchell's vision.

“With the depot renovated and ready to serve as the main trailhead in Pamplin, the mayor is looking at the empty wonderful old brick buildings ripe for revitalization and support facilities,” Elton said, ticking off a list of potential businesses.

“All of this combined,” he said, “is pretty exciting stuff.”

Elton believes the deal will prove a win-win for Norfolk Southern, the Town of Pamplin, and High Bridge Trail State Park.

The railroad, Elton explained, will sell some abandoned rail line to DCR, enabling High Bridge Trail State Park to gain access to a parcel of land owned by the Town of Pamplin. The trail will also be dropped down onto the 460 business right-of-way as it makes its final approach, Elton said, “and come down and make the left-hand turn at the bridge and come right up at the depot.”

Mitchell explained that access for the timber products trucks to Pamplin's wood yard will be moved as part of trail construction, allowing the railroad to close the at-grade crossing.

“…The bottom line is we can get it (the trail) to the depot,” Elton said of the verbal agreement.

Getting the trail to the restored Pamplin Depot was a long sought goal for DCR, as well as Pamplin.

Elton said that “since the very beginning when the gift of the trail was made to us, Norfolk and Southern had created a challenge for us. The trail stopped about a mile from Pamplin. And Burkeville. And obviously both towns and the state parks are anxious to see the trail get into the center of those areas so that it will not only bring outdoor recreational access into the heart of the towns but also the economic development we think the trail will bring to the area will be stimulated, not retarded.”

As for Burkeville, Elton believes a breakthrough might be in the works for that town too.

The trail's future in Pamplin, however, will soon be put in writing on various documents.

Signed, sealed and delivered by a mayor who would not give up.