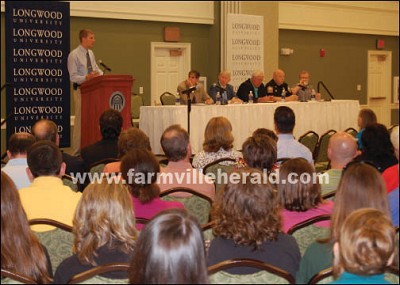 “Whether this is a gang or a group or whatever we want to call it, we're not sure…It's clear that in the last little while, anyway, there have been some people going around together looking for those targets of opportunity,” President Finnegan told the nearly 200 students, faculty and staff, “so be aware of your surroundings, take advantage of the things we have, like Night Walkers and the bus (the Farmville Area Bus), and walking together when you can, take the precautions you need to take and we'll have to keep working together to make sure that Longwood and Farmville are a safe (community)…”

The Farmville Area Bus has a route from the campus to Lancer Park until midnight and Longwood University Police Chief Bob Beach strongly urged students to use it rather than walk from campus to Lancer Park after dark. The most recent attack on a student occurred near Grove Street Park and the area near the pedestrian bridge over Third Street.

And Chief Beach said that if Night Walkers is not available then call the police and “we'll take you” if you have no other options. “And if anybody gives you a hard time about it, you come see me, but they won't.”

Other key pieces of advice offered during forum included:

Be aware of your surroundings.

If something doesn't feel right, call the police.

Don't text message while walking but do have your cell phone handy to contact 911 if necessary.

If you are confronted and asked for your purse or wallet, be compliant. Do not resist a robbery. Instead, become a good witness, looking for details to help police identify the assailant. And then call the police immediately-not your parents, friends or anyone else until you have reported the incident and all details to the police.

In another safety-related concern, Town Manager Spates said the Town will be installing additional street lights in the Grove Street Park area and will look into additional lighting, on Randolph Street, requested by a student.

Police, meanwhile, reported a suspect has been arrested in connection with an attack on a student on campus and a second arrest could be imminent.

“I can tell you this afternoon that we have made one arrest. One gentleman in jail at Piedmont Regional Jail,” Chief Beach said. “And we got word this morning and interviewed a juvenile who has also admitted to being involved in that group…Warrants will be sought for him.

“We are still investigating-Longwood and the Town of Farmville-to try to put all of these acts together, determine if they're interconnected and who all the players are. It's not a short process but it is one, if you're diligent enough and you're effective in your process that you can come to a conclusion. And that is our goal.”

Farmville Police Chief Mooney added that “we have a very strong lead” regarding the assault of the student on Grove Street.

“We are here this afternoon to talk about some serious business,” Pierson said at the outset of the forum. “Concerns that we all share, in terms of our own well-being and safety and our community. And I will tell you this, that talking with students around campus the last 10 days, communicating with parents and talking to administrators and staff and faculty, if there is a top level priority that we all have it's for one another's safety and well-being. When it becomes threatened it becomes clear that's the most important agenda item on the list. And that's certainly why we're here today.”

Pierson told the students, faculty, and staff attending the forum that “we all have responsibility to have a safe campus. We can't just rely on the Campus Police or Town Police. Each one of us own our responsibility to think a little bit ahead of time and know what we're doing.”

President Finnegan told those in attendance, “I'm glad you are here because this really is a significant issue for all of us at Longwood and in Farmville. It's not just a Longwood issue. Not just a Farmville issue…

“Safety, a safe campus, a safe environment is something we pride ourselves on and the recent incidents cause disquiet and concern, as it should, so we're trying to re-focus on what we're doing as a university, as a community,” President Finnegan said.

“This is, as Dr. Pierson said, our group responsibility but it's also an individual responsibility. You have got to be sure that you're doing things in a safe manner and taking the precautions that you need to take…I know that the question on all of our minds is is it safe to walk around this campus and is it safe for staff members to come to work. I'm not sure that we can give you those answers today. Together, we've got to work on this and make sure it is safe…We're serious about this. We care very much about every aspect of it.”

Town manager Spates reflected on the changes he has seen on campus since 1975 and said, “We still consider Farmville a safe community and I think with your help it will continue to be a safe community. We're here to hear your comments and your issues that you have and we'll put those into place.”

Chief Beach echoed some previous comments and noted “we were discussing this morning about the safety of the campus-are we safe here?-and I still believe that we are the safest campus in the Commonwealth. I believe that for a number of different reasons…But I do believe that the times have changed, we're in a new era. The mobility of people from one place to another causes lots of people to show up (in town or on campus) that you didn't realize were there so there is a certain heightened awareness” necessary.

Farmville's police chief echoed Chief Beach's statement about the investigation and the safety of the community. “There is work being done on what happened here. And after spending 22-plus years in Chesterfield, I can tell you you have a safe community. I see far less here…However, one robbery or one assault is too many. So we ask for any information and any feedback we can get to help prevent things,” Chief Mooney said.

“If things don't look right, if it doesn't make sense-call (police). And also keep your eyes open. Watch what's going on around you. Walk in pairs. Walk in groups. If something doesn't look right, please call the police.”

A student asked the forum panelists if the assaults were gang related and, answering first, Chief Mooney said “the word gang is thrown up a lot. I do believe what you have is a group of people acting out…Does that make it a gang?…By (state) Code, I guess it could be.”

There are people “breaking the law and they're running in a pack.”

But Chief Mooney and Chief Beach agreed that the activity is not being done by a nationally recognized gang.

“First of all, the understanding of what gang is pretty fluid, depending on where you're at. Where Doug came from in Chesterfield and where I came from in Northern Virginia (there were identifiable gangs).

Is this one of those nationally-known and recognizable gangs?

“No, it's not,” Chief Beach said. “Do they act as gangs? Do they have a gang mentality?

“…They are a group of people roaming around looking for crimes of opportunity,” Chief Beach said. “That's what gangs do….If the opportunity presents itself and the person is not aware of their surroundings walking down the street not paying attention then they'll take whatever crime of opportunity they have.

“Is it a gang? It depends on how you define gang.”

A key point Monday is that, though not a gang, groups of students walking together and aware of their surroundings, can eliminate the opportunity for crimes against themselves.