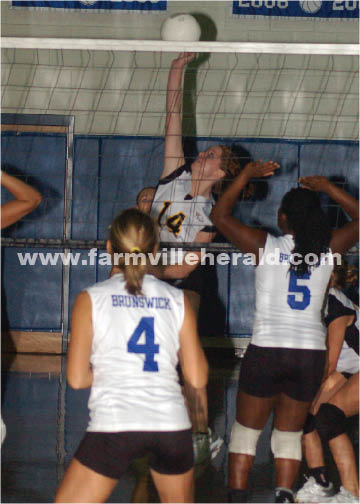 The Lady Eagles gave their hosts no chance at a potential upset bid.

“We sometimes let up, and tonight we didn't,” said PECHS head coach Bruce Bogese. “We were focused in our first two games, and kept it up in the third. We did what we were supposed to do.”

Prince Edward (8-2, 3-1 SSD) wasted little time in getting an early advantage. The Lady Eagles cruised to an easy victory in the first set, and despite getting off-track early in the second with a rotation error, did the same in the second.

“That was my fault,” said Bogese. “I lost track of where we were. I guess I'll have to run laps or something for that mistake.”

Despite the oversight, the Lady Eagles held a comfortable 13-6 lead when they took the serve. By the time it was lost, the serve, PE held a 22-6 advantage.

Brunswick and Prince Edward traded points early in the third set. The Lady Bulldogs fell behind early, but battled back to take a 10-8 lead, before PE took possession.

That was the opening the Lady Eagles needed. They worked their way to a 15-10 advantage, and were able to maintain it for the rest of the way.

Up 20-16, PE closed out the match with five consecutive points.

“I thought our seniors did a good job of leading us. They played their typical game tonight. Everybody got to play, and our reserves played their respective roles very well.”

“We couldn't adjust to their middle attacker, and that's something we'll have to adjust to when the time comes. There's a lot of volleyball to be played between now and then, though.”

Prince Edward, which is undefeated at home thus far, was scheduled to host Greensville on Thursday.

The Lady Eagles will travel to Powhatan on October 5 to wrap up their first trip through the district schedule.