Like It Or Not, These Health Care Benefits Have Taken Effect 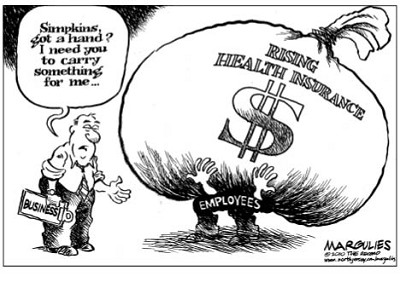 A number of new health care benefits took effect on September 23, as part of the national health care reform legislation passed by congress, and all of us should know what those measures are-whether we believe the legislation was a good thing or whether we do not.

The law is the law and we need to know how it affects us.

There has been no editorial endorsement or repudiation of the health care reform legislation in this space for two good reasons. First, I do not know all of the legislation's intricacies; nor do I believe most individuals possess a comprehensive knowledge and understanding.

Therefore, secondly, I cannot possibly know whether the legislation will prove, in the long-run, to have made effective reforms in the access to health care, the quality of health care, and the cost of health care-and each of those is something which the overwhelming majority of Americans would view as a crucial goal. Most of us would agree on that point, regardless of whether we view ourselves as Independent, Republican, Democratic, or some unique individual blend of all three or something else entirely.

I would not be the least bit startled to learn that the group of partially informed people, of which I am one, also includes some members of Congress, some people running for Congress to replace them in November, and many so-called talking heads and pundits of both the conservative and liberal persuasion who seem quite certain of their expertise and ability to accurately foretell the future.

I am not going to pretend to know either all the provisions of the health care legislation or what the future will be because of them. Let others do so, if they wish. Time will prove them right or wrong, long after the election in November has come and gone.

What I do know, and have made clear in this space since 1999, is that I believe it is wrong for a woman to be diagnosed with breast cancer and left untreated for more than a year because she was uninsured. A working woman who could not afford health insurance. Diagnosed and left untreated. It was clear from the moment my late friend Sarah Terry told me about that woman that something needed to be done about such situations. Together, Sarah and I conceived what became Virginia's Uninsured Medical Catastrophe Fund and has now saved over 100 lives by providing life-saving medical treatment for qualified uninsured Virginians who would otherwise die. Too many lives remain in jeopardy, however, and I have always believed that as a nation we could reform health care without breaking it in the process. That doesn't mean we have done so. Whether Congress will have achieved those long-term goals regarding access, quality and insurance costs is something I cannot say, but history will tell us with utter clarity.

I do know that the experience of working with members of the Virginia General Assembly for the past twelve years to save the lives of uninsured Virginians diagnosed with a medical catastrophe clearly shows bipartisan concern and caring on both sides of the political aisle. I know that Sarah, who passed away in 2007, would say the same thing. There have been Republicans and Democrats in both houses of the legislature, and the governor's mansion, who have played key roles in helping to establish and maintain funding for Virginia's Uninsured Medical Catastrophe Fund (UMCF). Even last year, when everything in the state budget seemed to be cut, Democratic Governor Tim Kaine's budgeted funds ultimately made it through thanks to key support from Republican Speaker of the House, Del. Bill Howell, and Republican 60th District House of Delegates member James Edmunds, among others such as Democratic State Senator Edd Houck. Politics used as a tool and a bridge, not a weapon to widen the chasm, can bring people of goodwill together when the cause is just.

Young adult children can continue to be covered by their parents' insurance plan until they are 26, unless they are able to obtain coverage at their own places of employment.

There will be no out-of-pocket cost for preventive care, such as colonoscopies, and mammograms, immunizations and pre-natal care, if you join or purchase a new plan. They will be covered and insurance companies cannot charge deductibles or co-payments for those services.

Insurance companies cannot use an unintentional mistake, an innocent technicality, on an application to cut off coverage, if you have paid your monthly premiums. So, if you get seriously ill and require expensive medical treatment an insurance company can't fine-tooth comb your original application looking to find an innocent mistake they could use as an excuse to drop you.

Lifetime limits on insurance benefits, on the amount of health care you can receive during your lifetime, are no longer allowed. No 'Okay, sorry but that's enough.' Annual benefit limits will eventually be done away with.

Or, as the Associated Press matter-of-factly reports the new provisions:

“Young adults can remain on their family's health plan until they turn 26.

“No more lifetime coverage limits, and annual limits start to phase out.

“Plans can't cancel coverage for people who get sick.

“No denial of coverage to children with pre-existing health conditions.”

Are these positive reforms? Good for people? You decide for yourself. But do know that they have now become the law. Check with your own insurer to determine how they specifically apply to your own coverage.