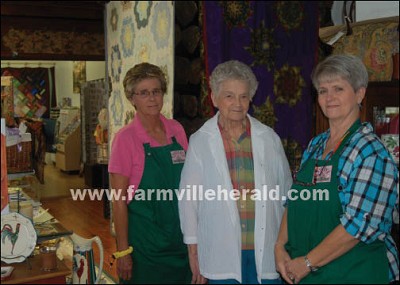 Lib's Place in Rice offers one-stop shopping for crafts of the past as well as more modern hobbies like scrapbooking and jewelry making. Their slogan states “Crafts are our business!” Once inside, customers understand what that means. Lib's Place not only supplies materials for any project – they show customers how to complete them.

The idea for Lib's Place was born of geography – and the frustration common to anyone who has ever attempted a craft or sewing project in the Farmville area in recent months.

“Where we live, you have to go 50 miles either way to buy supplies,” stated Elizabeth Lackey, known to her friends as Lib.

Lib's daughter Louisa affirmed her mother's observation. “You're right in the middle of making some bracelets and you run out of cord,” she added. “You have to drive 50 miles to buy $3 worth of cord – that's crazy.”

Louisa, who retired after a 24-year career with Barnes & Noble, was ready for a change. So was Linda Sue Lewis who had worked for a local lawyer's office for a number of years.

“Thirty years ago I had an antique/craft shop called the Rice Paddy and I loved it,” Lewis recalled.

Lewis and Lackey got together and began to make plans. A two-story log cabin building in Rice, once a local restaurant, was selected for the business, and work began in earnest.

“They had Linda's husband, Marjo's (Lib's other daughter) husband and Bill Hogan,” Lib related. “They were the carpenters and the painters – the ones who worked on the building.”

“They were here every day for the three months we worked on this building,” Lewis added. “It was a big job because, basically, this building had been vacant since the mid-1980s.”

During that time Marjo Mullins, Lib's daughter and also an accomplished quilter, began looking into inventory.

“Marjo took the time to study the fabric lines, made the contacts with the fabric companies, and got us initial orders – not only fabrics but notions also,” Lewis said. “We couldn't have opened when we did without her.”

When it came time to name the business, co-owners Lewis and Lackey didn't hesitate – it had to be Lib's Place.

“Lib was such an inspiration to us,” Lewis said. “She supported us in every kind of way.”

Lib Lackey, 86, comes from a long line of women who sewed.

“I'm from the mountains of North Carolina,” Lib explained. “My mother made all our clothes – that was during the depression time and we had to do it. My grandmothers were quilters, and my grandmother's mother had to make her material before she could sew it. Mountain people did that.”

Following the family tradition, Lib made all her family's clothes as well.

“My mother was in a home demonstration club and took every class there was to take,” Louisa said. “She's still doing that, trying out all the classes we have to offer.”

“We have a class on mending, an oil painting class that has been amazingly full, we have scrapbooking, cake decorating, candy making, and how to quilt a table runner,” Louisa explained. “We're also going to start hosting children's craft birthday parties. Last summer we had a cross stitch class for kids that went really well.”

Lib, Louisa, and Linda are gratified by the response to their craft business since it opened on Memorial Day weekend.

Speaking of the fabric arts, Lib commented, “We lost one whole generation, but now the younger people are trying to pick up. I think they looked back in time and thought they'd missed something – and they have.”

The craft shop trio also enjoys the willingness to share displayed by local crafters and quilters.

“What we enjoy is the show and tell,” Lewis said. “Every day somebody brings in something they've made to share with us. I have seen some of the most amazing work!”

Encouraging that work is the reason for an expanding list of classes and workshops.

“One of the things we are starting is a Sip and WIP Day,” Lewis said. “We're going to put on a pot of coffee and have some lemonade. You bring your 'work-in-progress' whatever it is – quilting, crocheting, quilting – and join the fellowship with other people who are working on something.”

At Lib's Place, sharing a craft or sewing project is almost as important as the finished work itself.

“Crafters, quilters, and artists are unique – they love to talk about what they're doing,” Lewis concluded. “Really, it's the fellowship.”

Fellowship and fabric arts – neither are a lost art at Lib's Place.