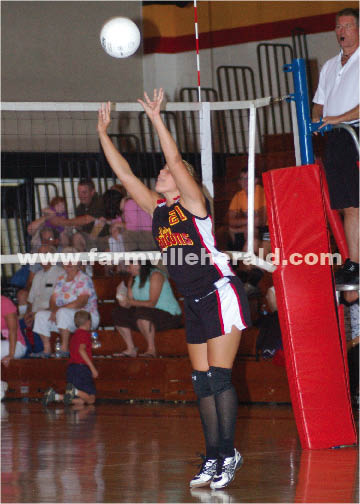 FARMVILLE – After weeks of practicing against one-another, the Fuqua School volleyball team was eager to face a team wearing a different colored uniform when the Lady Falcons opened their season on Monday night in Gilmer Gymnasium.

“We made our share of mistakes,” said FS head coach Lora Smith. We had serving problems, setting problems and spiking problems. But a lot of those come from a lack of communication, and they're problems you expect to have this time of year.”

For Cumberland, it was a reminder to savor small victories and to keep focused on what's to come.

“We've got to keep thinking in the big pitcure,” said CHS head coach Heather Storrie. “We've progressed in a lot of ways. We had some slumps where we watched the ball hit the floor, but it didn't happen as much as it did before.”

The two teams traded runs in the first set, with Fuqua jumping out to a 12-4 lead, before Cumberland rallied to take a 17-14 advantage with FS hitter Jordan Berg on the back line.

Upon her return to the front line, Fuqua reasserted control.. Two straight Tatum Davis aces put Fuqua ahead for good, another pair of aces by Charlotte Cave put the first game away.

Fuqua jumped out to an early lead again in the second set cruised to the victory after Davis took serve with the Lady Falcons ahead 18-12.

Cumberland responded in the third set. The Lady Dukes jumped out to a 9-2 advantage. Fuqua battled back to tie the set on eight different occasions, but could never get a lead.

Cumberland regained the serve after taking a 19-18 advantage, and built a little cushion on back-to-back kills by Mackenzie Parker and Breanna Davis. Fuqua managed to tie the set three more times, but Cumberland took advantage of several Fuqua miscues to get its first set victory of the season.

Fuqua regrouped, and started to control its returns to jump out to a commanding lead in the fourth set to cruise to an easy victory.

“We were trying to kill the ball at times, and had trouble getting our spikes to land in the court,” said Smith. “A well-placed tip can result in a point, just like a power spike. A kill is a kill.

“At one point in the match, I saw everybody up on the front row except for our libero, or our setter wasn't getting to the net. To their credit, after we addressed that and they corrected it.”

Cumberland seemed to have difficulty adjusting to the low ceiling in Gilmer Gymnasium.

“We've been practicing in our gym all summer,” said Storrie. “I think it frustrated them a little, but, that's something we've got to adjust to. Every court is different, and we've got to play around it.”

Cumberland traveled to Prince Edward on Wednesday night, and will host Goochland on Wednesday, September 8, before traveling to Appomattox on September 9.

“We're leaving here a lot better than we were when we came in here,” said Storrie. “Seeing their progression is exciting to see.”

“This was a good tune-up for us as we begin play in the VCC,” said Smith. “We now have a match under our belts, and we can pin point some problems that we may not be able to see in our practices.”