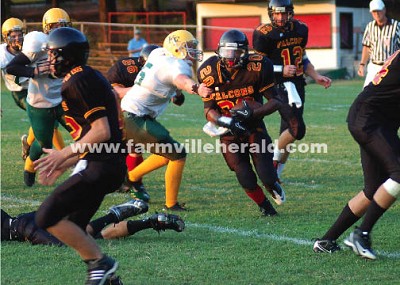 FARMVILLE – The start wasn't as quick as it was in the first week of the season, but the result was quite similar for the Fuqua School football team which cruised to a 33-6 victory over Virginia Commonwealth Conference rival Kenston Forest on Friday night at Gilmer Field.

Fuqua shook off a slow first quarter to explode for 20 points in the second quarter and capture their second victory on the young season.

“We probably didn't play as well as we did in our first week,” said FS head coach Skeeter Fore, noting that teams usually make their greatest strides between the first and second games. “I don't think we did that. But you have to credit Kenston Forest for some of that. They were motivated to prove they were better than what their first week score showed.”

Junior quarterback Charles Williams led the Falcons with 178 yards rushing and scored three touchdowns on the evening, including a 44-yard touchdown run in the first quarter on a broken play about three minutes into the game.

Junior tailback Larry Haskins accounted for Fuqua's other two scores – a nine-yard touchdown with 6:26 remaining in the second quarter to cap a short drive that started with a Michael Marquez 40-yard interception return, and a one-yard score with 55.2 seconds remaining in the half that gave FS a 27-0 halftime lead. On the night, he rushed for 64 yards on 12 attempts.

Kenston Forest scored two field goals in the second half, and moved the ball fairly well, but had trouble in the red zone.

“We did a good job of holding them out of the end zone,” said Fore. “They had a really good field goal kicker that could hit from almost anywhere.”

Early in the second quarter, Kenston Forest attempted a 55-yarder that hit the ground about two-yards in front of the cross bar.

Carter Cunningham rushed twice for 22 yards, and Williams was 2-3 passing for 11 yards. One pass went to Cunningham and Cody Bailey caught the other.

Defensively, Haskins led the Falcons with ten tackles, while Clayton Worrell had four tackles, five assists and a fumble recovery. Williams had four tackles and three assists, while Coty Hanks blocked a field goal attempt and Marquez had the interception.

“We did what we needed to do,” said Fore. “And we'll go on to the next week. We'll need to continue to improve each week from here. It's not going to get any easier.”

After two weeks at home, the Falcons will step out of the VCC to take on Carlisle School in Martinsville on Friday night at 7 p.m.

“We don't know much about them, but we do know that they can score points. We'll have to be focused, and turn in a strong effort from the start.”