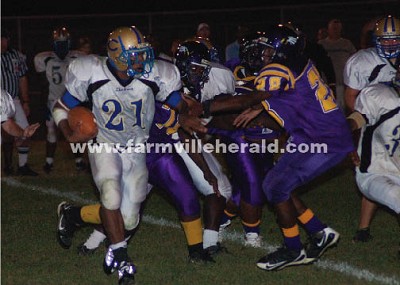 FARMVILLE – It may not have been the prettiest of contests, but given the rivalry between Cumberland and Prince Edward, the Dukes will certainly take the 28-3 victory and move on.

Multiple fumbles by both squads kept the teams from getting into a set rhythm offensively – with youth and inexperience playing a major role – but the Dukes took advantage of enough breaks to cruise to a comfortable victory.

“They recovered their fumbles, and they recovered our fumbles,” said PECHS head coach Terrence Edmonds. “We went from losing one fumble in the first week, to where we had a hard time hanging onto the ball. Given the number of turnovers we gave them in the second half, I have to be pleased with how our defense kept their heads up all night.”

Prince Edward lost three fumbles in the second half, with all three coming after gains of at least eight yards. Despite that, Cumberland, which held a comfortable 22-3 lead at the half, couldn't capitalize on any PE mistakes until quarterback Devonte Booker hit go-to receiver Rashawn Sims for a 65-yard touchdown pass with a little under three minutes to go in the game.

“I'm pleased with how our defense played, but we showed that we have to work at establishing our running game,” said CHS head coach Michael Sutton. “Our passing attack looked good, but when we get into the red zone, we've got to come away with points.”

Cumberland took a 2-0 lead with a safety midway through the first quarter, and expanded on its lead with 3:51 remaining in the period on a 59-yard touchdown pass from Booker to Sims over the middle.

Prince Edward moved the ball down the field, and got into scoring range early in the second quarter, but had to settle for a Michael Lawrence 23-yard field goal.

Cumberland extended its lead to 16-3 with 9:27 remaining in the first half on Booker's second touchdown pass to Sims – a 27-yarder on third-and-17. Then, the Dukes regained control of the ball after Prince Edward muffed the ensuing kickoff, though PE was able to hold Cumberland out of the end zone giving a sign of what was to come.

Cumberland scored with 39 seconds before halftime on a pass that was tipped by Demarius Trent, into the hands of a PE safety, only to be popped back to Trent, who ran 30 yards for the touchdown.

“It's about time we got a break like that,” said Sutton. “Those seem to go against us more often than not.”

Prince Edward received the opening kickoff and took the ball into Cumberland territory before committing the first of three second half drive-killing fumbles. Despite getting the ball in prime field position, the Dukes were unable to capitalize until Booker found Sims streaking down the sidelines late in the game.

“Fumbles were the difference in the game,” said Edmonds. “We did a good job of limiting them with the exception of Sims. He's going to break a few, and for the most part, we did a good job, but when he got open, Booker was able to find him for some big plays.”

“Both teams are pretty young, and that showed in their fumbles, and our inability to capitalize on them,” said Sutton. “Our defense played well all night, and applied pressure on their quarterbacks. The coaches came up with a great scheme. I don't touch the defense, so the credit for this one has to go to the coaches and the defense.”

Booker was 10-16 passing for 229 yards and four touchdowns on the evening. Sims hauled in five catches for 184 yards and three touchdowns, while Trent had one catch for the 30 yard touchdown and June Davenport had two receptions for 10 yards.

Quentin Langhorne led the Dukes with 104 yards on nine carries.

“That's an issue for us right now,” said Sutton. “We've got to get the running game going, and in turn that will help our passing game even more.”

“We're still working with our line,” said Edmonds. “We had some plays where we looked good, and others where we had some breakdowns. It's going to be something we'll have to work with all season, but the goal for them is continued improvement.”

Prince Edward will host Buckingham on Friday night at 7:30, while Cumberland returns home to host Appomattox at 7 p.m.