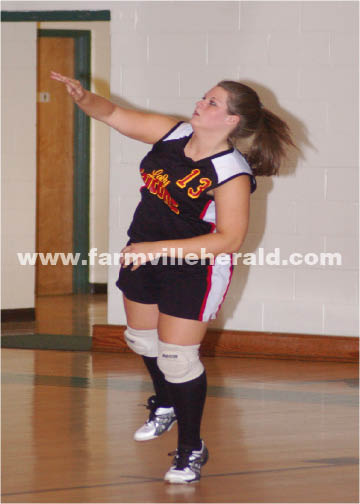 BLACKSTONE – What started out to be just one stop on a 20-game regular-season schedule, turned into one of the more rare feats in sports on Tuesday night in Blackstone. That Fuqua defeated Kenston Forest 3-0 wasn't surprising. What happened in the second game was.

Having just outlasted Kenston Forest 25-22 in the first game, Fuqua outside hitter Charlotte Cave took the serve to begin the second. She also finished it, having never relinquished her turn.

“I was just trying to get the serve over the net,” said Cave, who only had six aces in the second game. “I was able to put it in play, and our defense did the rest.

“I needed the help of the team a lot. There were some points, where I thought we were going to lose it, but we came up with the point.”

Much like a pitcher in the late innings of a perfect game or a no-hitter bid, her teammates started to avoid her between points.

“I first started to think about it around 15-0, and as it went on, I felt some pressure. My teammates stopped talking to me, and I really just thought about winning the next point, and not worrying much beyond that.”

After the third game (won 25-20 by Fuqua), the chair umpire offered his congratulations, saying that in his years of officiating, he's never seen a perfect game.

“I haven't seen it before either,” said FS head coach Lora Smith. “Kenston Forest took us to 25-22 and 25-20 in the other two games, so I wouldn't expect it to happen. I wanted to substitute, but I was scared to make changes. You don't want to substitute when you have the serve, because it disrupts the rhythm. I did it one time, but I didn't do it again.”

Kenston Forest then scored seven consecutive points to close to within a point at 17-16, before Fuqua pushed the lead back to 22-18 by winning five of the next seven points.

A tip by Kenston Forest junior Dee Gunn pulled the Lady Kavaliers to within two points at 22-20, but the two teams traded mistakes down the stretch to allow Fuqua to escape with the narrow win.

After getting stunned in the second game, Kenston Forest managed to keep things close in the third. Fuqua was unable to shake the Kavaliers, but the Lady Falcons never lost the lead. Up 21-16 late in the third game, Kenston Forest rallied with three points to close to 21-19, but Fuqua got an ace from sophomore Caroline Wiles to take a 23-19 lead and ended the match on a kill by sophomore Caroline Bryant two points later.

“I sometimes feel like I harp on the negative, but really, we're doing well to be so young,” said Smith. “We do have a lot of work to do. We are streaky, and I do think at times we don't communicate well, but I do see improvement each time out.

“One thing we will be working on is that I saw a lot of one-handed plays. That's not acceptable, but for some reason when you see one player do it, for some reason it becomes contagious. We've also scored a lot of points off of other team's errors so far. To finish where I think we can finish in the league, that's something we'll have to correct. We'll face some teams on our schedule that just don't make mistakes, and we'll have to score.”

Fuqua was scheduled to travel to Richmond Christian on Thursday night, and will return home to face Southampton Academy on Tuesday night.