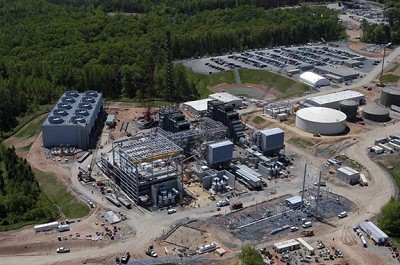 NEW CANTON – The idea for a power station at Bear Garden sparked almost a decade ago when Supervisor Brian Bates heard that Tenaska was considering locating a natural gas-fueled electric generating facility in Virginia.

Bates and county officials along with several members of the community met with Tenaska representatives to express the county's interest.

Although Tenaska constructed that facility in Fluvanna County, the Nebraska-based independent energy company announced in April 2001 that it was seeking a special use permit to locate a similar facility in the northeastern part of Buckingham County.

However, economic factors dimmed those plans but Buckingham officials left the light on with the hope that Tenaska would return. Eventually, Tenaska did come back and brought Dominion, too.

By December 2007, Dominion announced that it was purchasing the power station development project from Tenaska. And, the rest is a powerful story for this rural county and its economy.

Equipped with hardhats, safety goggles, and steel-toed boots, the camera-packing tourists walked, climbed, and became well acquainted with a facility that has the capability of providing electricity to 146,000 homes at peak demand. And speaking of peak demand, the temperatures on the day of the tour soared close to 100 degrees.

Beginning with a brief history of Dominion Virginia Power, Leopold shared that the Richmond-based company recently celebrated 100 years of service to Virginia customers.

“That actually dates back to the Virginia Railway and Power Company,” explained Leopold. “Richmond and Norfolk were in the first wave of electrifying trolley cars for urban mass transit.”

According to Leopold, the company now serves approximately 2.4 million electric customers in Virginia and North Carolina. To do so requires 6,000 miles of electric transmission lines and 18,300 megawatts of generation.

Using a pie chart, she noted the company's diverse set of generation assets with a balanced fuel mix of natural gas, coal, nuclear, hydro, oil, and some biomass.

Talking about two of Dominion's major capital spending programs-environmental and load growth, Leopold said that since 1998, the company has been installing pollution and air-emissions control equipment.

Noting that Dominion has spent $2.6 billion on environment equipment for improvements in its generating fleet, Leopold said that by the middle of the decade, that figure will be $3.7 billion.

With another graph, Leopold pointed to the result thus far of those dollars. “The major three air emissions of sulfur dioxide, nitrous oxide, and mercury going down by at least 80 percent and, in the case of mercury, nearly 90 percent.”

Moving to load growth, Leopold shared, “We call it Powering Virginia.” Explaining that Virginia has actually been the second largest importer of electricity behind California, she stated, “So the goal of Powering Virginia has been to increase the energy independence and have less reliance on imported power.”

Leopold offered, “Bear Garden came out of that process. We had a gap to meet the demand.” Noting an anticipated increased load of 5,600 megawatts by 2019, she said, “So, we have to build to serve that load. We have upgraded some of our existing units. We have already installed three new gas-turbine peaking facilities at Ladysmith with a couple coming on last year. And Bear Garden is the next step in that process.”

Explaining that the station will serve the entire Virginia customer base, Leopold offered, “Power flows where the demand is. It will likely go locally but we have high-voltage transmission lines here that will serve customers through-out Virginia.”

According to Leopold, construction began in April 2009, with Fluor Corporation serving as engineering, procurement, and construction contractor. She added that the estimated project cost is $619 million.

By the end of July 2010, construction at the station was approximately 70 percent complete, with the facility scheduled to be on-line in spring 2011.

Leopold said the station would produce 580 megawatts of electricity, using natural gas as its primary fuel and oil as a back up. A 2-on-1 combined cycle unit with two combustion (gas) turbines and one steam turbine will provide the generation.

She explained how the gas turbines create super-heated air that goes into a boiler called a heat-recovery steam generator, which, in turn, produces steam to drive the steam turbine.

Moving on to the emission controls, Leopold said air-emission regulations require the use of Best Available Control Technology, BACT, for all regulated air pollutants.

“Natural gas itself is a very low emitter of sulfur dioxide and particulates,” she explained. “And in addition, we have an SCR, selective catalytic reduction, which reduces through use of ammonia the nitrous oxide.”

Leopold said the project has yielded 700 jobs during its 30-month construction period. “We are about at the peak of construction right now and have been close to the 700 people on site for the last several months,” she stated.

According to Leopold, once completed, Bear Garden will operate with approximately 25 full-time employees and yield more than a million dollars per year in property taxes to Buckingham County.

“And will provide clean, reliable, and economic electricity for Virginia customers,” she added.

With a footprint of 35 to 40 acres, Bear Garden is about the same size of a single large coal unit. “It's relatively large but the trend tends to be getting larger to get the economies of scale,” said Leopold.

How It Will Operate

Gitchell explained how the station's water treatment area takes raw water from the James via a water facility operated by a subsidiary of Tenaska.

Noting that many power plants have a once-through system, Gitchell said Bear Garden is a closed-loop system and the water is continuously pumped and re-circulated.

Dominion's Bob McKinley added that the closed-loop system is very environmentally friendly, using 95 percent less water from the James than a once-through system.

The two GE 7FA combustion turbines will each produce approximately 170 megawatts, said Gitchell, likening the gas turbines to jet engines. Their exhaust goes to two recovery boilers and the resultant steam drives the third turbine, which produces about 240 megawatts.

Working together the 2-on-1 combined cycle produces the 580 megawatts. According to Gitchell, the turbines run at a synchronous speed of 3,600 rpm. Each turbine powers a generator, which, in turn, makes the electricity.

Leopold described Bear Garden as an intermediate capacity unit. “It is very easy to turn off and on,” she said, noting that larger units would take longer to start.

“These start relatively quickly and they shut down quickly,” she stated. Noting that demand is less during the night, Leopold offered, “You could run them 16 hours a day, shut them off at night, and be ready for the morning peak.” She reminded, “There is no way to store electricity.”

She continued, “So a typical day for a facility like this would be to start-up at 6 a.m. and turn off at 10 p.m., covering the intermediate part of the need.”

Leopold explained, “This station will actually turn on and off according to the demand. And, it may stay on all night…like at this time of year. But in the spring and the fall it may be shutting off every night and coming on every morning.”

According to a time-line provided by Dominion, construction should be completed in January 2011; and, performance testing wrapped-up in April. Commercial operation is slated for May 15, 2011.

County Administrator Rebecca Carter knows all too well how long it took the project to come to fruition. From those first conversations with Tenaska ten years ago to Dominion's finalized purchase of the project in March 2008, Carter said she remained cautiously optimistic and hopeful.

“This is evidence that some prospects take years to materialize,” shared Carter. “Not many good opportunities happen over night.” She added, “Most take perseverance and patience.”

Carter stated, “The Bear Garden project has already brought revenue to our county through trans-occupancy taxes, sales tax, and increased business for our restaurants.”

Noting the anticipated $1 million in annual revenue from Bear Garden, she concluded, “Bear Garden's tax base and the employment opportunities will be assets to our county and its economy.”

Situated along the James River across from Bremo Bluff, Bear Garden is, indeed, a powerful newcomer to Buckingham. Thanks to county officials who left the light on, the county's economic future appears brighter.

Moreover, Buckingham is playing a role in Dominion's Powering Virginia initiative to increase the state's energy independence. Power on, Buckingham.