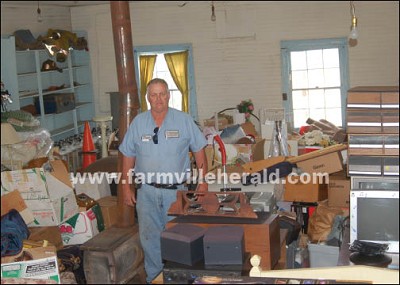 They sold a pig.

“My father bought the pig,” Campbell, who was ten years old at the time, recounts.

The sale's been bringing the bacon home for the department ever since.

Beyond the pig, the fire department has offered an unusual menagerie over the years, from a barber's chair to store fixtures, cars, trucks, boats, furniture, appliances to the set of redneck wind chimes (a collection of beer cans attached by string to a board) that's in this year's lot. It's just whatever folks want to donate-most anything including chickens, but no dogs.

“Something about…the original auctioneer said something about it's not good to sell your-how did he put it…man's best friend you shouldn't sell…,” Campbell said.

The Prospect Fire Department, a community hub that has been nurtured by a giving community, will celebrate their 50th anniversary in October. Plans are in the works for a parade through the community (located west of Farmville just off of U. S. Route 460) and an open house of sorts on October 17.

Before that, however, is the October 2 sale-the 50th annual such fundraising event.

The first such sales were at Nordstrom's Service Station, which Campbell noted is in the middle of the current U. S. Route 460 (before a second lane was added). The fire department was yet to have a building, back in those days, though they did have a 1950 Ford truck purchased with monies raised from those community sales.

“The first three years, the fire truck was kept down in Scotty Booker's garage…and when the fire alarm went off, folks had to go down there, open up his garage…,” Campbell said.

He also noted, “…Back then, when they first started out, if you drove the fire truck to the fire and came back, you had to put gas back in it.”

Out of your own pocket.

The original firehouse was built in 1963, an extension to the rear of the structure was added in 1970 and the latest expansion came in the late '80s.

Today, the building doubles as a community center of sorts, having hosted a political debate, a flu vaccine clinic, rabies vaccination clinics and it continues to serve as a polling site for voters.

Membership has grown from the 16 it started with in 1960 to some 38 on roll (plus four lifetime members) and about 15 who serve in the supporting auxiliary. The department consistently averages about 100 calls per year, according to Campbell. Still, it's been a good year this year, having only 58 calls at the time of our interview last week, including a perhaps surprising number in August-two.

The County chips in annually to help fund the department, but the annual harvest sale also plays an important role. The proceeds from the sale almost covers one of the department's biggest expenses, insurance.

This year's event likely includes both frogs and princes, depending on one's perspective. One may find washers and dryers, upright freezers, tables and chairs, a vanity sink, a “very nice” computer desk, pony saddle, TVs, a computer monitor, a manual typewriter, and horse shoes (appearing to be the shoeing kind, not the throwing variety).

It's typically stuff folks are hesitant to throw away, but-short of selling-will donate.

Again, Francisco Auction Company's E.A. “Bill” Talbert will do the honors, as he has for many years. A sizable portion of donated items come to the department via word-of-mouth advertising. It's no surprise, perhaps, when the department has been conducting similar such auctions for 50 years.

Though some items are dropped off, firefighters also pick up donated goods year-round for the sale (contact Al Mason at 434-574-6625 or Campbell at 434-574-6618 to have items picked up for the auction), often traveling out of the area. The department has four storage buildings available and will continue to accept contributions up until the day of the sale.

For some, the event might be a way of supporting the local department through giving and buying. One individual, at one point, purchased the same electric stove four years in a row.

Like clockwork-minus the one rainout-the sales have come and gone. Yes, there was that one year they had a fire call the day of the sale. Campbell recalled they finished fighting the fire at 5 p.m. and the sale started at 6 p.m.

“Of course, everybody was dead (tired) when they started the sale,” he said.

But the show went on.

The event is more than just a fundraiser, however. It's a homecoming of sorts for some folks who don't come to bid, but to rejoin with the Prospect community.

If auctions aren't quite the thing, plans are in the works for a community parade.

Lynn East, who's heading up the October 17 program, cited that the event will start at 2 p.m. on October 17 with a route through Prospect, then return to the firehouse.

“…We're hoping a lot of people will come back. We're gonna fix some kid's bags and have lots of food and tour the fire trucks,” she said.

Smokey Bear will be in attendance as will Darin the Lion (of the DARE program), a 50-50 drawing and DJ will be playing for the family event.

A celebration of sorts, open and free.

The annual harvest sale events get underway at 7 a.m. Saturday, October 2 with a yard sale (call 434-574-8830 to rent a space), a bake sale starting at 7 a.m., with the auction kicking off at 2 p.m. Barbecue will also be for sale that evening, beginning at 4 p.m. There will also be a raffle for cash.