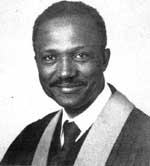 Reverend Robert Lee Davis was born on August 17, 1919 to the late Mary Anderson Davis and Elitt Davis in Norfolk. He was raised by his Uncle Early Anderson and wife Cornelia Anderson (both deceased) whom he considered his mother and father. This home also included his beloved first cousins, his “brother and sisters.” His sister, Beatrice Brooks preceded him in death.

In 1943, Reverend Davis moved to New Rochelle, New York. He met the love of his life, the former Alease Johnson and they were married on April 4, 1949. To this union they were blessed with one son, Barry Alexander and a daughter, Robin Camille. Their beloved son, Barry Alexander Davis preceded him in death on January 4, 2001.

He was the lead tenor with the Dixietones Quartet of New Rochelle, New York. He did not always want to preach. He wanted to sing professionally, but learned the Lord had greater things for him to do. He believed he was called not just to preach, but to Pastor, which he described as “a continual giving of God's word, as well as the nurturing of each soul of a congregation.”

In 1979, the St. Paul Baptist Mission in Middletown, New York, was incorporated under his leadership and became a recognized church under the Baptist Association. He served St. Paul Baptist Church faithfully from 1979 to 2002. Upon his relocation to Cumberland County he became an Associate Minister at Sharon Baptist Church.