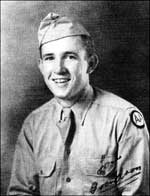 Mr. Wharam was a veteran of WWII serving in the United States Army and was a recipient of the Purple Heart. He was a self-employed general contractor for more than 50 years and worked as an office manager and insurance adjuster and the Indiana Employment Security Division for several years.

Graveside services were held Tuesday, October 7 at Crown Hill Cemetery in Indiana. Memorial contributions may be made to a charity of choice.

OCTOBER 7 – Our beloved Carolyn Ann Varner Baldwin was called home to God in the early morning hours of... read more