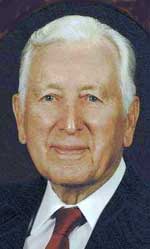 CREWE, Sept. 18 – Raymond F. Mahan, 93, of Crewe, claimed the promise of his salvation Saturday, September 13, 2008. Born and reared in Prince Edward Co., he never lost his love of the farmland. An industrious and adventuresome youth, he sold homegrown vegetables, managed Roses Department stores, worked as a carpenter with his father, and owned the “Sweet Shop” in Crewe. His landscaping and nursery business, and his gardening allowed him to work the soil and beautify the land.

Raymond was active in the Crewe Community having served on town council and as vice-mayor. He was also Chaplain of the Crewe Kiwanis Club, and served as a Gideon. After retiring from Norfolk and Western Railroad with 30 years of service, he served as Chaplain for Piedmont Geriatric Hospital for 10 years.

As a youth, he became a Christian and he lived out his faith as a member of Crewe Baptist Church, teaching Sun-day school and serving as a deacon and a trustee. He began outreach programs, one of which was a community Sunday school class. Raymond and his wife, Margaret visited many area nursing homes where they lead devotions and singing. His Fellow Choir members at Crewe Baptist Church were his devoted friends for many years.

Raymond was preceded in death by his parents, Lemuel and Eunice Mahan; his wife of 63 years, Margaret Robertson Mahan; and a brother, Reid Mahan. Surviving are his daughter, Rhea Strum and husband, Bobbie of Midlothian; three grandsons, David Cox, Brendan and Matt Strum; and a brother, James H. Mahan of Rice.