Put The Wraps On Scrimmages 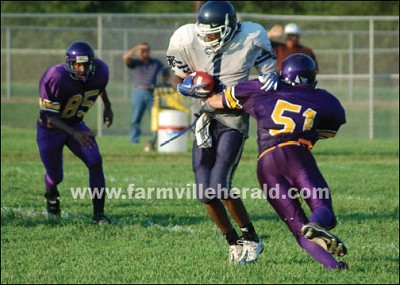 Prince Edward scrimmaged Randolph-Henry in its final scrimmage of the season last Friday night. PE senior defensive end Noah Bowman gets a sack on the R-H quarterback during the controlled portion of the scrimmage. PE scored four times (two defensive TDs) to R-H's one score in the controlled portion. The two teams played about a quarter-and-a-half of real-game conditions. The Statesmen scored once, and held the Eagles scoreless. PE starts the season for real this Friday at Fluvanna. A full preview of all four Herald-area teams will appear in Friday's edition.