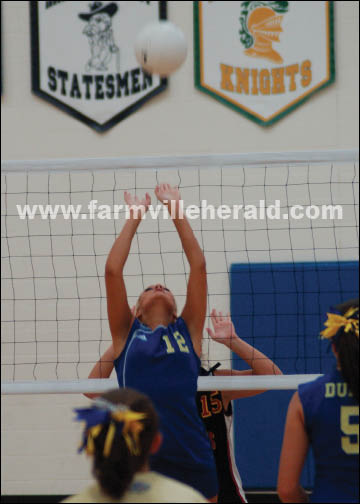 CUMBERLAND – Like Mark McGwire at a Senate steroids hearing, the Cumberland High School volleyball team isn't in the mood to talk about the past.

With good reason. The last couple of seasons haven't been good to the Lady Dukes. But as is the case for all teams this time of year, August comes with the promise of a fresh start.

“We can't compare now to before,” said Cumberland first-year volleyball coach Heather Storrie, who along with assistant Matt Pearman have a history of turning fledgling teams into competitive programs. “We want to give Cumberland volleyball a new name, and to do that, we can't look back.”

Nobody said rebuilding the program was going to be easy, but the feeling is that things are heading in the right direction. Four seniors are on the 2010 squad, but only two of them return from the 2009 team.

“We saw last year's [roster], but never thought any more of it,” said Storrie. “It's given everyone a clean slate, and I think it's helped.”

“We're hoping to be able to take advantage of some of our height. We not only have some height, but they have athleticism as well. We've got to find a way to make that work on a volleyball court. So far, everything we've put in front of them so far, they've been able to do to the best of their ability.”

One of the first approaches the CHS coaching staff took upon the start of fall practice was to keep everything simple.

“If they can get the simple things, we can then begin to work from there,” said Storrie, who in three seasons took the CHS soccer team from one win in a season to the James River District in three seasons. “It's the same in every building program. You've got to do the little things, before you can move on to things that may be more complicated.”

The simplest rule in volleyball is to keep the ball from hitting the ground on your end of the court. What that means for Cumberland is that, while each member of the team has her specialty – either as a passer, a setter, a blocker or hitter – their job is not exclusive.

“The girls are athletic enough to play what is needed to be done at that particular time.”

Cumberland will attempt to utilize two setters in its rotation.

“Two setters has seemed to helped us keep our focus. Right now, we feel more comfortable with two. It gives us more diversity on the court.”

Cumberland will utilize a libero with Ashton Showalter.

“She's our Energizer bunny. She's willing to sacrifice herself for any ball, and in our scrimmages, she's come through for us in some key situations.”

Given the square-one approach to the 2010 season, needed improvements are almost across the board. Nothing has stood out as becoming a big strength, which is not necessarily a bad thing.

“I can't pinpoint anything that stands out at this point,” said Storrie. “We're coming along as a whole. You can't say that one spot is excelling over another right now.

“We need to work on our hits and be more aggressive. Make things happen, and not be reactive. We don't want to just pass the ball around and wait on the opponent to make a mistake. That might work against some teams, but it won't work in the big picture.”

“We want to succeed, and be the team that's talked about in the school and the community. I think the girls are ready for that. They want it bad, and are willing to work to get there.”