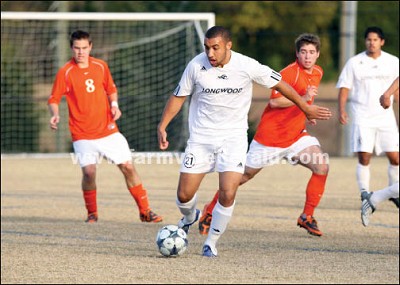 FARMVILLE – The Longwood University men's soccer team finished 2009 with a 6-12-2 record while going 5-2 at home at the Athletics Complex.

The Lancers posted a 2-2 mark in the Atlantic Soccer Conference where they will compete again this season.

The Lancers open the 2010 campaign on Wednesday, September 1, when they travel to Richmond to take on the University of Richmond at 6 p.m.

Longwood will host a home exhibition game against Loyola University on Saturday, August 28, at 1 p.m. at the Athletics Complex. Admission to all men's soccer matches is free.

Coach Atkinson comments on the upcoming season below.

“Every new season breathes a renewed sense of optimism and excitement and this season infers it will be no different. While we lost some caliber players to graduation, we also return seven starters who will be the cornerstone to our success. I believe our squad is maturing and slowly beginning to figure out what it takes to be successful at this level. Last year we played, at times, seven starting freshmen and a strong schedule predominantly on the road.

“Learning to win on the road is critical to our growth and while results were humbling at times, we all felt we were closer than ever to overhauling big programs who we have been slipstreaming us for some time.

“Our squad is under no illusion that they think are better than what they are and in the same token I believe they have an inner confidence brewing and desire to right some wrongs from last season. Consistency is a key term and when achieved I think you will see a lot from this young team over next few years.”

“As our lone senior a lot rests on his shoulders but Harvey has shown over the years what he is capable of and how important he is to our plans.

“He is a big, strong, traditional English center forward who has an appetite for goals and will be demanding the service needed to remember well his last year as a Lancer.”

“Joel is a first-class collegiate goalkeeper and the man to topple for a starting spot. He has been our goalkeeper for the past two seasons. Shane is recognized as a modern-day defender who possesses great skill and can play out from the back while Zack has a super engine and a will to do well and contribute for the team.

Phil is a strong, mature player with a deceptive turn of pace and will give us good width in attack while Cody is a big presence at the back and now has the football IQ to be a productive player for us.”

“Patrick gained vast experience as a freshman last year, playing all but two matches and facing top-level competition in the process. Parker has a presence and a tenacity in midfield to break up plays and springboard attacks while offering a presence in the final third.

“Vinnie is a tough tackling midfielder with an on field maturity that makes him important to our plans.

“Devin has the ability to play in a variety of positions which makes him an invaluable part of our jigsaw puzzle while Michael Tegler had a great spring season, looking sharp, strong and more accomplished on the ball whilst defending well.”

“We have been working diligently to bring in the right caliber of athlete to improve our program and represent Longwood University athletics. We feel we have achieved a great balance of positional need while also increasing the overall ability level of our team.

“We are happy with our newest Lancer class and look forward to shaping them into contributing Division I athletes this coming season.”