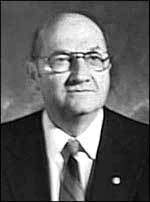 SEPTEMBER 18 – Lester E. Andrews Sr. of Farmville, died Tuesday, September 16, 2008 at Virginia Baptist Hospital in Lynchburg. He was born on February 3, 1915, in Ettrick, to Everett Junious Andrews Sr. and Cora Bowman Andrews. This family, including eight children, moved to Farmville in 1928.

Mr. Andrews loved the Farmville Baptist Church which he joined in 1928. During his years of membership he served as trustee, chairman of the board of deacons and life deacon.

He was also committed to education. He served Hampden-Sydney College, which he attended as a member of the class of 1936, as a trustee on the board of Hampden-Sydney Music Festival. Les served on the Board of Visitors of Longwood College and as president of the Longwood College Foundation. In addition, he served as chairman of the Prince Edward County School Board and on the board of Fuqua School.

Visitation will be held at Puckett Funeral Home on Thursday evening, Sept. 18, from 6 until 8 p.m.

The funeral service will take place at Farmville Baptist Church on Friday, Sept. 19, at 11 a.m.

Memorial contributions may be made to the Lester E. and Frances Price Andrews Scholarship Fund at Hampden-Sydney College, the Farmville Baptist Church, Johns Memorial Episcopal Church, or the Prince Ed-ward Rescue Squad.