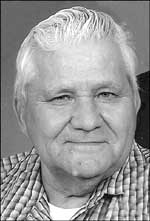 PAMPLIN, Sept. 25 – James J. Loveday, 70, of Pamplin, died Wednesday, September 24, 2008 at his home. He was born September 7, 1938 in Buckingham to Coye and Lida Finchum Loveday. James was preceded in death by his parents; his brothers, Donald R. Loveday and Roger L. Loveday; and his sisters, Mary Loveday and Wilma “Sue” West.

Mr. Loveday will be remembered as a devoted husband, father, sibling, uncle and friend by all whose lives he has touched. He had a great love for his church, Concord Baptist, where he became a member in 1966. He knew the value of hard work demonstrating his talents as a very skilled carpenter, retiring after 45 years in 1999.

James was well known for his big and amazing garden that he shared with all. He was an exceptional outdoorsman who took great pleasure in his hunting and fishing skills. He had a special love for baseball and coached little league for many years.

Funeral services will be held at 2 p.m., Saturday at Concord Baptist Church, with interment to follow in Trinity Memorial Gardens.

Visitation will be from 7 until 8:30 p.m., Friday at Shorter Funeral Home.

Shorter Funeral Home, Farmville is in charge of arrangements.

JACKSON, Pattie A., 71 Of Farmville