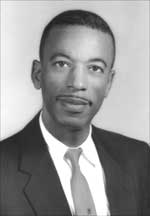 DILLWYN, Oct. 30 – George Frank Harris died Sunday, October 26, 2008 at his residence in Dillwyn. He was born on April 1, 1915 near Manteo, in Buckingham County, to George Phillip Harris and Annie L. Nicholas Harris. He was the seventh child born in a family of ten siblings. George was preceded in death by his wife of 49 years, Americus Burrell Harris; their daughter, Marcia June; son, Karl Lorenzo; his parents and eight siblings.

He graduated from Buckingham Training School, but was unable to immediately attend college. He spent four years working in several types of jobs, such as, operating the home farm, substitute teaching, teaching adult education and the Civilian Conservation Corps (CCC). In 1938, he enrolled in Virginia State College (University), graduating four years later with a B.S. Degree in Agricultural Education. He was awarded a M.S. Degree in Secondary Education and Guidance in 1951. He did further study at Tuskegee Institute, University of Kentucky (Lexington) and University of Virginia.

A life long educator, Mr. Harris served as an instructor and principal in Gloucester County from 1942-1947. From 1947-1980 he was employed by Buckingham County Public Schools as principal of Buckingham Training School and Carter G. Woodson High School, Director of Federal Projects, and Director of Instruction. Even after his retirement, he continued to volunteer for a variety of community and state programs.

Mr. Harris was very active in the community. He was a member of the Voter's League, Democratic Committee, local and state boards of the American Cancer Society, and a life member of the NAACP. He was instrumental in founding and developing many programs to benefit the Buckingham community. Some of them include the Buckingham Afro-American Life & History Society, Central Virginia Health Center, Buckingham County Library, the county's first Headstart Program, first dental clinic in the county, first ESEA Program, Buckingham County Improvement League, and member of the first Dillwyn Fire Department.

The funeral service will be Saturday, Nov. 1, at 12 noon at the Buckingham County High School Gymnasium, with interment in the Jerusalem Baptist Church Cemetery.

Reid's Funeral Home, Dillwyn, is in charge of services.