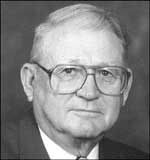 BEDFORD, Sept. 9 On September 5, 2008, Bedford lost one of its most loved native sons. Frank Helton Gordon Jr., better known as “Buddy” passed away at Carilion Roanoke Memorial Hospital surrounded by his loving family. He fought a brief but valiant fight against Leukemia.

Buddy was born on Friday, March 29, 1929 to Eva Frances Burnette Gordon and Frank Helton Gordon Sr., who preceded him in death.

Buddy served in the U. S. Army from 1951-1953. He was a member of the Special Forces and was stationed in Germany. While there he was a medic and member of both football and baseball teams which provided entertainment for their fellow troops.

Shortly after his return, Buddy was named the Director at Recreation for Bedford City and County. His passion for sports and children made him a perfect choice. His goal was to instill in the children of Bedford a love of sports and sportsman-ship. The Dixie Youth Baseball Program was introduced during his tenure. As a result, many youth of the county were able to participate in summer baseball and to play on the local, state and national levels. Many other youth and adult sports programs evolved during his time with the department. Buddy committed countless hours to the development and maintenance of the fields in Bedford, which are still enjoyed today.

Eventually, Buddy joined CMT Sporting Goods where he managed their Lynchburg store until his retirement. People often ask, “What is a Hokie?” To this we say, “Buddy Gordon”! He was a loyal Hokie for most of his life, through thick and thin. He was a Hokie Club Representative for decades. He truly loved Virginia Tech and passed on his enthusiasm to both his children and grandchildren. Buddy is survived by his wife and best friend of 57 years, Catherine Varner Gordon; his children, Robin G Stowell and husband, Mark, Barry A. Gordon and wife, Terri and Laura G. Baudendistel and husband, Jay; ten grandchildren including: Cynthia, Justin and Ashley Stowell; Hunter and Allie Gordon; and Peter, Caitlin, Audrey, Gretchen and Ava Baudendistel; a sister, Patricia Recknor and husband, Carl and many nieces & nephews.

A service of celebration was held on Tuesday, September 9, at Bedford Baptist Church, where he had been a member for many years, with the Rev. Dr. David Henderson officiating. Interment, with military honors by American Legion Post # 16 followed in Virginia Memorial Park.